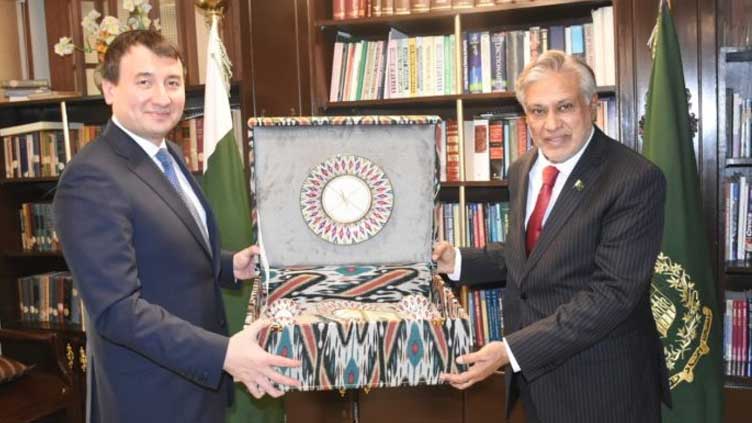 ISLAMABAD: A delegation of Uzbekistan headed by Khodjaev Jamshid Abdukhakimovich, Deputy Prime Minister /Minister of Investment and Foreign Trade called on Federal Minister for Finance and Revenue Senator Mohammad Ishaq Dar here at Finance division on Monday and discussed with him matters of mutual interests.

Finance Minister Senator Mohammad Ishaq Dar welcomed the delegation and highlighted cordial and brotherly relations based on common faith, shared history and cultural affinities between Pakistan and Uzbekistan. The Finance Minister further underscored that constructive interaction at the top leadership level has given a positive momentum to our bilateral relations which must be continued and strengthened. He highlighted the potential of cooperation in economic and investment sectors and expressed desire of the Govt to further strengthen and diversify bilateral trade and economic linkages between the two countries.

Mr. Khodjaev Jamshid Abdukhakimovich, Deputy Prime/Minister of Investment & Foreign Trade of Uzbekistan acknowledged the friendly and cooperative relations with Pakistan. He exchanged views to extend bilateral economic and trade relations with Pakistan and showed keen interest to establish road and rail link between the two countries through Afghanistan.

The two sides discussed various avenues of cooperation to deepen the trade and economic partnership between the two countries including improvement of road infrastructure from Tashkent to Pakistan, Pakistan- Afghanistan- Uzbekistan Rail link, export/import facilitation, etc. The two sides agreed to enhance the current trade volume between both the countries at optimal level. The Uzbek side also sought technical support of Pakistan for its inclusion in WTO and getting GSP+ status.

The two sides expressed confidence that scheduled meeting of Joint Inter Governmental Commission (IGC) in early February, 2023 in Pakistan will further enhance bilateral economic cooperation and investment to the mutual benefit of the two countries.

In conclusion, the Finance Minister thanked the Deputy Prime/Minister of Investment & Foreign Trade of Uzbekistan and extended full support and cooperation of the Government to enhance bilateral economic and trade relations between the two countries.

The meeting was apprised of amount of outstanding Cess recoveries from various entities and discussed GIDC Acts and Supreme Court’s order in this regard. It was informed that Rs. 447 billion is still outstanding and needed to be recovered and there are 3194 petitions in various court of laws.

Examining the Court’s decisions and stay order, the Finance Minister expressed serious concerns over the non-recoveries of Cess dues and expressed resolve of the government to recover each penny from the defaulters on account of Gas Infrastructure Development Cess (GIDC).

He directed the authorities to share updated break-up of arrears of sector wise GIDC in the next meeting in order to frame up legal and administrative strategy for fast track recovery of the outstanding GIDC outstanding dues.