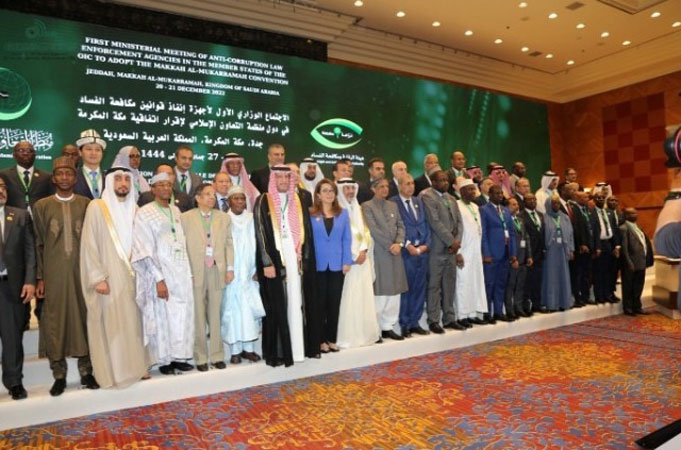 The first ministerial meeting of anti-corruption law enforcement agencies of the member states of the Organisation of Islamic Cooperation (OIC) started in Jeddah to adopt the Makkah Al-Mukarramah Convention.

The meeting is being hosted by Saudi Arabia, held under the auspices of the Crown Prince and Saudi Prime Minister, Prince Muhammad bin Salman bin Abdulaziz Al Saud. The meeting discussed the draft endorsement of the “Makkah Al-Mukarramah Convention”, with high-level international participation of ministers, heads, deputies, and representatives of the enforcement agencies of anti-corruption laws in the member states of the OIC.

In his address, the president of the Oversight and Anti-Corruption Authority (Nazaha) of Saudi Arabia Mazen bin Ibrahim Al-Kahmous affirmed the support given by the Saudi government to the efforts of combating corruption at the local and international levels. He stressed that the issue of combating corruption was one of the essential pillars of Saudi Arabia’s vision 2030. He explained that the ministerial meeting and the Makkah Al-Mukarramah Convention were based on the resolution of the Council of OIC Foreign Ministers held in Islamabad last March, which welcomed the initiative of Saudi Arabia, in its capacity as chair of the 14th Islamic Summit, to hold this ministerial meeting in order to prepare a draft agreement to combat corruption. He pointed out that the Convention reflects the awareness of the OIC member states that corruption is a cross-border crime and, therefore, cannot be combated effectively without the commitment of states to cooperate with the aim of exposing corruption, reducing safe havens for the corrupt and their money, and returning the looted funds to their countries of origin.

The OIC Secretary General Hissein Brahim Taha affirmed that the “Makkah Al-Mukarramah Convention” represents the most appropriate framework for preventing and combating corruption in the OIC member states through effective mechanisms for prevention, law enforcement, international cooperation, and asset recovery. He noted that OIC member states needed legal mechanisms that help promote the principles of transparency and integrity to establish the foundations of good governance.

The secretary general renewed his sincere and profound thanks to the Kingdom of Saudi Arabia for its generous initiative, as the Chairman of the 14th Islamic Summit, to host the First Ministerial Meeting of Anti-Corruption Law Enforcement Agencies in the OIC Member States. Executive Director of the United Nations Office on Drugs and Crime Ghada Wali praised the initiative of the OIC to hold this meeting, which represents an important step to strengthen the international framework of combating corruption.

She also commended the efforts of the Kingdom of Saudi Arabia and Nazaha in hosting and supporting this meeting at a critical time, regionally and internationally, and after two years in which the world was affected by an unprecedented epidemic. Wali stressed that corruption has become an existential challenge for our societies. She revealed that corruption costs the world huge amounts of money and reduces the ability of countries to provide public services.

Secretary General of the International Criminal Police Organization (INTERPOL) Jürgen Stock expressed his thanks to Nazaha and the government of Saudi Arabia for hosting this important meeting, noting that INTERPOL cooperates with many regional and international organizations on combating corruption. Stock pointed out that INTERPOL is cooperating closely with the Kingdom of Saudi Arabia through its Riyadh Anti-corruption Initiative, praising the Saudi leadership in combating corruption not only at the national and regional levels but also at the global level. The secretary general of INTERPOL noted the level of cooperation between law enforcement agencies in the OIC countries and INTERPOL, calling for more exchange of information on combating corruption.Chair of the Egmont Group of Financial Intelligence Units, Xolisile Khanyile, expressed her thanks to the Kingdom of Saudi Arabia for its immense efforts to combat corruption. She explained that combating corruption is combating financial crime, so this crime must be addressed, noting that in order to do so properly, we must track money. President of Naif Arab University for Security Sciences Dr Abdul Majeed bin Abdullah Al-Bunyan appreciated the significant role played by Nazaha in promoting integrity and combating corruption not only at the national level but also internationally.