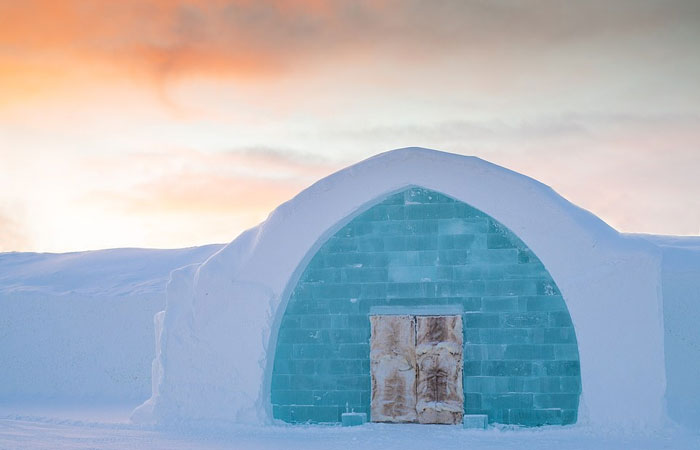 It’s a whittled winter wonderland. Sweden’s Icehotel for 2022/2023 is officially open for business. Filled with amazing ice sculptures, the hotel has been constructed and reconstructed every year since 1989 in the village of Jukkasjarvi, 125 miles north of the Arctic Circle next to the banks of the Torne River. The construction of this year’s Icehotel, the 33rd overall, saw 24 artists from around the globe spend weeks carefully crafting 12 unique suites, plus one deluxe suite in Icehotel 365, the year-round version. A glittering dome, video-game-inspired sculptures and supersized mushrooms are among the beautiful ice creations that have been carved on the site. On top of that, there is a new design for the hotel’s ceremony hall for ‘intimate celebrations’, complete with a ‘stylised flower’ at its heart, designed by Wouter Biegelaar and Viktor Tsarski. The construction process began in the spring when blocks of ice were harvested from the Torne River and stored in an ice warehouse in Jukkasjarvi. Later, when construction began, the artists sculpted their creations using a whopping 500 tonnes of ice and 10 Olympic swimming pools’ worth of ‘snice’ – a mixture of snow and ice.