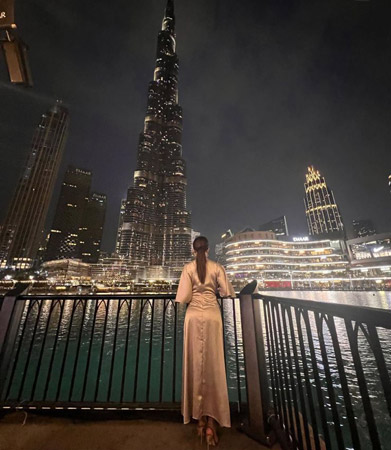 Ushna Shah is a stylish actress who has become well-known for her superb and diversified acting skills. She also made every effort to inspire her followers with captivating content on her social media platforms.

The “Balaa” star enjoys travelling to various locations throughout the world in addition to her time spent in Pakistan. She has just landed in the Gulf Tiger and is currently enjoying greatly.

Fans learned through her most recent batch of photos that the diva is in Dubai, on her way to the Burj Khalifa, the highest structure in the world, and having a great time. She seems to be in a relaxed attitude, but the atmosphere in Dubai also draws a lot of attention. Ushna captioned her picture, “Speaking of magnificent structures.” Fans were incredibly eager to express themselves in the comments section as one of the followers wrote, “Beautiful,” and another described Ushna as their “favourite.”

While numerous emoticons of various types were also posted in the comments section by other fans.

Ushna Shah has made a strong statement because of her tremendous acting abilities, humility, and fiery content. Apart from that, she is always vocal about social issues, and her passion for sports, particularly cricket, is admirable. Ushna is quick to praise the Pakistan national cricket team whenever they perform well. Because of her dedication to her fans, the “Parizaad” star has amassed over 2.5 million Instagram followers.