* The stunning Saint Barthelemy supervilla features six bedrooms, 10 bathrooms, an indoor waterfall, a cinema and even a soundproofed nightclub 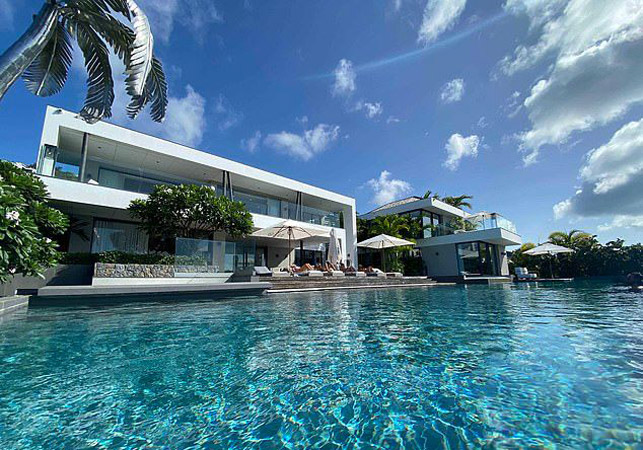 A luxury Caribbean holiday home where stars including Beyonce and Jay Z jet in for their sun-soaked getaways is up for sale for an eye-watering $80million.

Villa Neo, which hosted rapper Tyga for his 30th birthday celebrations, was put on the market by British billionaire Doug Barrowman, the husband of bra tycoon Michelle Mone.

The stunning Saint Barthelemy supervilla features six bedrooms, 10 bathrooms, an indoor waterfall, a cinema and even a soundproofed nightclub. The 17,000sq-ft home was built by Barrowman in 2018 and was rented out for $20,000 a night on the island loved by the rich and famous for its sandy white beaches.

The embattled Mr Barrowman and Baroness Mone are also selling their six-bedroom townhouse in Belgravia, London, for £20million. They face accusations that she and her family profited from a £200 million deal to provide PPE to the UK Government at the height of the first COVID-19 lockdown in June 2020.

The Caribbean hideaway was put on the market last year but it is still up for sale as the wealthy couple look to cash in from their luxury portfolio.

Earlier this year, police also raided two of her London properties, as well as four properties on the Isle of Man, ‘in support of’ a potential fraud investigation by the National Crime Agency (NCA) into a PPE company linked to Mone.

Located above St Jean, Villa Neo has 22-foot ceilings, floor-to-ceiling windows that disappear into the walls, a landscaped interior courtyard, and a 95-foot-long infinity-edge pool, Jacuzzi and swim-up bar.

There is also a loggia with a drop-down projector and screen. The 600 sq ft nightclub doubles as the home’s second theatre, while the bedrooms have terraces and televisions that rise up from the floor so as not to block the island views. Villa Neo also has a service wing with its own entrance, a laundry room, staff bedrooms and a catering kitchen with an access window to the main kitchen. With the incredible features on offer, it is no surprise Tyga invited his model friends Amber Rose, Nadia Almualem and AE Edwards for his birthday bash in 2019. This year alone, Leonardo DiCaprio, Jeff Bezos, Drake, Gwen Stefani, Dua Lipa and the Kardashians have been spotted on the island.

‘Rarely does a property become a synonym for what it represents by setting standards that are par excellence,’ reads the listing for the property.

‘Perched on a private hillside with picturesque views of Saint Jean’s bay, Villa Neo is not only one of the largest villas in St. Barts, it is also one of the most spectacular homes in the world.

‘Designed with huge facing glazings, vast spaces, stone walls with cascading waterfalls, and floor-to-ceiling windows that frame unobstructed views of the ocean. ‘No expense was spared in creating this Unicorn villa and that is evident in the premium materials, high-end appliances and luxurious amenities. ‘Every single detail was considered, from the elevator that spans all floors to the advanced technology that controls the 24 camera security system, av and electronic doors. ‘Villa Neo is nothing short of an architectural masterpiece and its commanding presence will take your breath away.’

Villa Neo is filled with natural light, with a floating glass staircase ascending through the house and floor-to-ceiling windows offering a panoramic ocean view.

The chef’s kitchen is fully kitted out with Gaggenau appliances including an extra-large fridge, gas hope, industrial equipment and wine cooler.

The main bathroom contains its own dressing room, en-suite with a whirlpool bath and a shower with garden and ocean views. Each of the six bedrooms contains a TV that rises from the floor with state-of-the-art sound systems. ‘Step outside and enjoy the smell of success as you float above the sea on your spacious pool deck,’ reads the listing.

‘The infinity pool is one of the largest residential pools in St. Barts.

‘There is also a Jacuzzi, outdoor kitchen, massive TV that descends from the ceiling, and a swim-up bar. Designer lighting also makes the pool deck spectacular for evening entertaining.

‘Much like a fine wine, Villa Neo will make a lasting impression and leave you and your guests wanting more.

‘Villa Neo is more than a home, it is an unforgettable, life-changing experience. Simply stated, Villa Neo is heaven on earth.’