Now, to the table

* Fawad says PTI to dissolve Punjab and KP assemblies on Dec 21 if talks 'fail'
* Party wants 'betterment' in ties with armed forces and judiciary, not 'deterioration' of relationship
* PTI would have won more seats in the 2018 elections had establishment not intervened 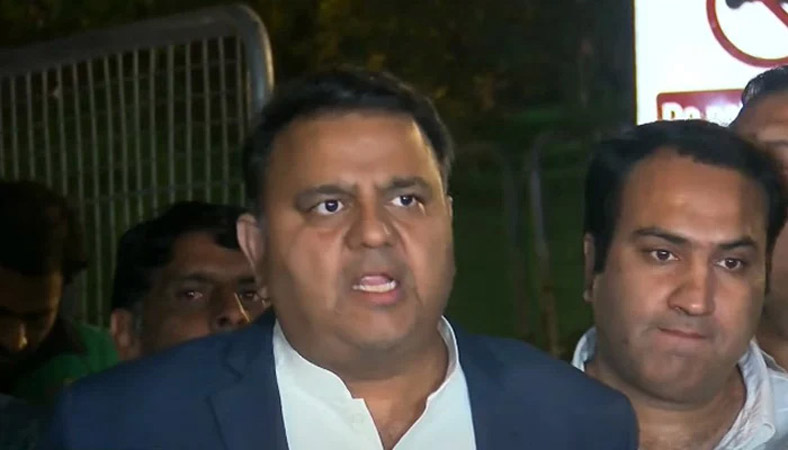 Former information minister Fawad Chaudhry confirmed on Monday that “informal communications” between the PTI and federal government, pertaining to the snap elections, have begun, a private TV channel reported.

“We are trying to make the coalition representatives, especially Finance Minister Ishaq Dar […] who is more [determined] from the PML-N […] we told the president […] the problem is that the government is rapidly becoming irrelevant due to the economic situation,” Fawad said while speaking to the media in Lahore and subsequently talking to a private TV channel. “We have tried to make them understand that no system other than elections can bring stability in the country,” he told reporters.

Fawad said that Finance Minister Ishaq Dar held two meetings with President Arif Alvi. “Ishaq Dar told the president that [the government] is ready for elections, but they first need to consult Nawaz Sharif,” he revealed. “Ishaq Dar said he would consult Nawaz Sharif and inform President Arif Alvi. However, he hasn’t responded yet and we are still waiting,” he added. Fawad said if elections talks do not materialise by December 20 then the party will dissolve the Khyber Pakhtunkhwa and Punjab assemblies on December 21. “They [coalition parties in the Centre] are afraid of holding elections as they feat the PTI will win,” Fawad said.

Assuring that the PTI had the full support of its ally, Pakistan Muslim League-Quaid (PML-Q), the PTI leader said that Chief Minister Punjab Pervez Elahi and his son Moonis Elahi also want the assembly’s dissolution and elections within 90 days after they are dissolved. “Pervez Elahi and Monis Elahi have assured us that they will dissolve the assembly whenever we ask,” the former federal minister said.

In the news conference, the senior PTI leader said that the party sought “betterment” in ties with the armed forces and judiciary, not “deterioration” of their relationship. “We are seeing that constantly, despite our efforts for betterment, [there is] deterioration in ties with the judiciary and the armed forces. Some elements are exacerbating the differences,” he said. The PTI said the country’s leadership should ensure that human rights violations should be stopped immediately. “The way in which the law was violated in the last 7 to 8 months should end.”

The ex-federal minister said that after the registration of the first information reports (FIR) against Senator Azam Swati – who is behind bars in the case of controversial tweets – FIRs are also being lodged against party leader Shahbaz Gill. “We have serious concerns over this. We believe that despite our attempts to better the ties, someone, or maybe the federal government is trying to worsen the situation.” Fawad said the PTI “did not receive help from the establishment” in the 2018 general elections. He predicted that the PTI would have won more seats in the 2018 general elections had the establishment not intervened. “In 2018, several of our candidates lost by a margin of just 1,000 votes.” “If PTI were among the losing parties in the elections in 2018, no one would sit in [Jahangir] Tareen’s plane,” Fawad said. He also rejected the claims that politicians became part of the PTI on someone’s advice. “In 2018, everybody saw the PTI as the winning party.”

Fawad said PTI leaders are facing multiple cases and there were reports of the Election Commission of Pakistan (ECP) mulling to start proceedings against Imran Khan for his removal as party chief. “The political scene in the country is incomplete without Imran Khan,” Fawad said, claiming that given the situation in the country, the party believes that Prime Minister Shehbaz Sharif, PPP Co-Chairman Asif Ali Zardari, and JUI-F Chief Maulana Fazlur Rehman might shift abroad. Fawad further said although the situation is worsening, the PTI wants to move towards general elections and stresses that the government should not resort to any “unconstitutional” move when it comes to the formation of an interim government. “In Pakistan, an interim government cannot stay [in power] after its stipulated time. The constitution does not allow it and we reject any proposal related to this,” he said.

The PTI leader said when the party’s lawmakers are mulling the strategy amid the no-confidence motion, a majority of them were of the opinion that they should not hand in their resignations. “However, once Imran Khan and the party decided, everyone saw that a historic 127 resignations were presented in the National Assembly and were accepted.”

The former federal minister also said that there might be a difference of opinion between the lawmakers in the two provincial assemblies of Punjab and Khyber Pakhtunkhwa but the final call would be Khan’s. “In this regard, we have kicked off meetings. We have summoned Lahore’s MNAs and MPAs to hear them out. Tomorrow, Khan has called a meeting of the party’s senior leaders to mull the strategy relating to politics and assemblies’ dissolution,” he said. He added that another crucial issue that Pakistan faces was that of the economy as the foreign exchange reserves – held by the State Bank of Pakistan (SBP) – had fallen below $8 billion.