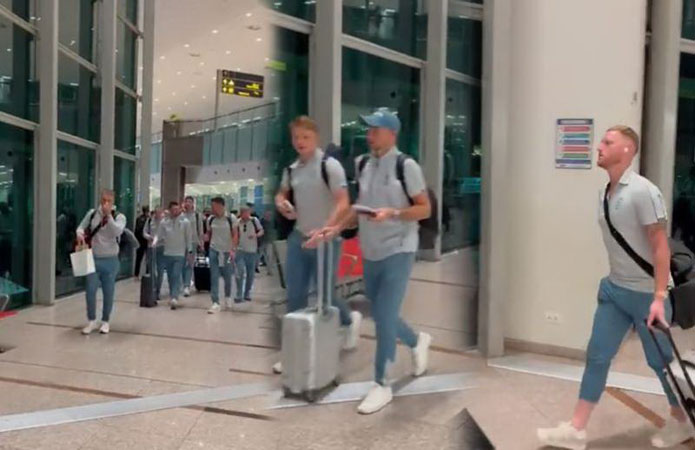 LAHORE: England cricket squadlanded in federal capital Islamabad on early Sunday to play three Tests for the first time in Pakistan since 2005. The first Test will be played at Rawalpindi Stadium from December 1, the second in Multan from December 9-13 and the third in Karachi from December 17-21. England earlier played England played a successful seven-match Twenty20 international series two months ago in Pakistan but have declined to play a Test match there for 17 years because of the precarious security situation.

They were due to visit Pakistan last year but pulled out after New Zealand abandoned their tour minutes before the first one-day international, citing security alerts.There were fears of a similar pull out earlier this month following an attack on former Prime Minister Imran Khan during a protest march in Wazirabad, a city in Punjab province.But England’s Test skipper Ben Stokes quashed all fears following a positive security advice.

“It’s been a long time since England have played Test cricket in Pakistan,” Stokes said in Abu Dhabi on Friday. “With what happened with Imran Khan recently, there was a little bit of concern, but we have Reg Dickason, who has been the security man for many years with England, and we left it in his capable hands.In terms of the tour itself, I’m really looking forward to it,” Stokes added.”I’ve never been there, and I’m quite interested to see what the security lark is like. I’ve heard it’s pretty intense.”

The squad and support staff were whisked to the team hotel under heavy security which Pakistan has been putting in place since the revival of international cricket in the country since 2015.Pakistan were forced to play their home matches on the neutral venues of the United Arab Emirates following attacks on the Sri Lankan team in 2009.But Pakistan have hosted multiple teams in the last seven years, the most notable being Australia earlier this year.

Vying for World Test championship: The three-match series is part of the World Test championship. Pakistan, currently fifth in the nine team championship to England’s seventh, will hope for a series win in order to finish in the top two to play the 2023 final.Pakistan, led by star batter Babar Azam, will be without key fast bowler Shaheen Shah Afridi who is nursing a knee injury and experienced leg-spinner Yasir Shah, not selected due to poor form.England fast bowler Mark Wood is in doubt for the first Test with a hip injury while experienced James Anderson, the only survivor of the 2005 tour but did not figure in the 2-0 series defeat, will lead the attack.