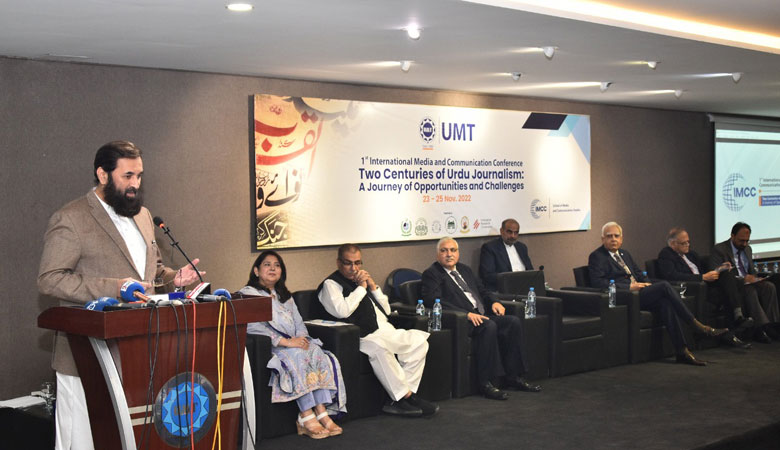 Governor Punjab Muhammad Baligh Ur Rehman congratulated the UMT administration for organizing a successful conference. He said that Urdu is a language that integrates all other languages. He said that in 1857 Urdu language played a very important role and so has a significant place in the whole world. He further said that the Urdu language and journalism have a very important role in the history of the subcontinent. Governor Punjab said that journalists have always made sacrifices in the history of the subcontinent and I am deeply saddened by the recent death of journalist Arshad Sharif. In his concluding remarks, he said that the moral training of people is very important so that the system of justice can be practiced in society.

DGUMT Abid Sherwani expressed his views and said that this is the first international conference of its kind to be held on the Urdu language and Urdu journalism. Along with providing quality education to its students, UMT also provides successful and useful platforms like this conference to groom them, he added.

Senior journalist Salman Ghani, while expressing his views, congratulated UMT for organizing this fruitful conference and said that a great person like Dr. Hasan Sohaib Murad Shaheed has made a successful institution like UMT which is truly dedicated to the promotion of education. He said that UMT has a very important role in shaping the standards and character of the youth with education. The important role of the Urdu newspaper in the freedom of Pakistan can never be forgotten, he expressed.

Senior Journalist Mujibur Rahman Shami while addressing congratulated the management and media department of UMT for organizing the first International Conference on Urdu Journalism in Pakistan. He said that Urdu newspapers have fought battles for freedom. He said that generation after generation, Urdu literature has trained people. We have to further strengthen the importance and role of Urdu journalism, he advised.

Former Senator Javed Jabbar, highlighting the importance of the Urdu language and Urdu journalism, said that there is no example of the hardships and difficulties endured by journalists.

At the conference, International journalists highlighted the role and importance of journalism through Zoom and said that journalism plays an important role in community building in a country. At the end of the ceremony, DGUMT Abid Sherwani along with Rector UMT Dr. Asif Raza and Prof. Anjum Zia presented a souvenir to Punjab Governor Muhammad Baligh Ur Rehman.