* McGuinness has summoned illustrious artists before, from Caravaggio to William Shakespeare, biography cut with glinting theatricality 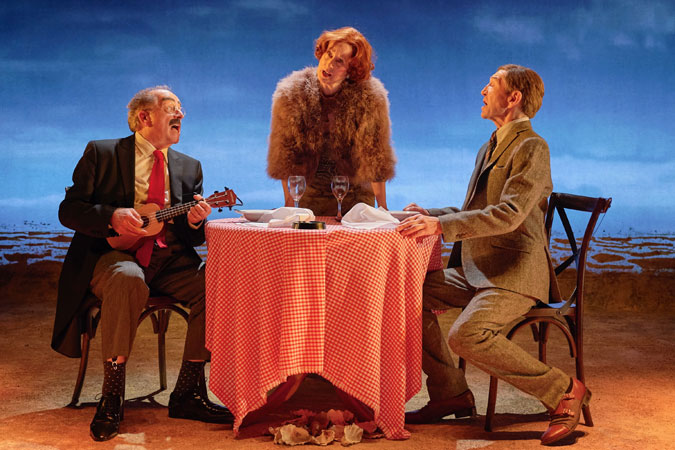 Unlikely as it seems, TS Eliot and Groucho Marx were friends, of a sort. They became pen pals in 1961, when the author of The Waste Land wrote to the star of Animal Crackers asking for a signed photo. Three years later they met for dinner in London – a not entirely successful evening, according to Groucho: he wanted to discuss King Lear while Eliot preferred to chat about Duck Soup.

Eliot died a year later, and this odd anecdote from the annals of entertainment prompts Frank McGuinness’s laborious new play for the Irish company b*spoke. Far from docu-drama, it’s an uncanny caper set in what seems an anteroom to the afterlife. Adam Wiltshire designs a deserted restaurant, where glass baubles flicker above the table, sawdust spills thickly over the floor and clouds gather on a Magritte blue sky. A mysterious proprietor summons her guests: “Rise!” It’s as much seance as supper.

McGuinness has summoned illustrious artists before, from Caravaggio to William Shakespeare, biography cut with glinting theatricality. Here, Groucho and Eliot flatter and provoke each other, bridling at compliments and disarmed by cross-talk. Unexpectedly, Eliot does conjuring tricks and the pair launch into a zany charleston whenever champagne is served. There are even versions – wistful to raucous – of Marie Lloyd’s music hall hit, The Boy I Love is Up in the Gallery. Ian Bartholomew wears Groucho’s signature costume – tails, eyebrows, thick greasepaint moustache – while Greg Hicks gives Eliot a suave hauteur, tight-lipped at displays of emotion. Their jousting smokescreen of puns and quibbles reveals divisions, which implicitly include the poet’s rancid antisemitism. Marx needles him with banter about Israeli champagne until Eliot snaps, “the subject is closed”.

Despite the seasoned talents involved in Loveday Ingram’s production, the play feels heavy footed. The caustic repartee becomes wearying and like The Waste Land – “one long grumble,” as Eliot has it – it’s dense with allusion, from King Lear to Marianne Moore’s poetry and a 1607 banquet for James I. It’s a melancholy tease but, possibly like the improbable real dinner, an uphill struggle. At the Arcola, London, until 10 December.