‘Leonor Will Never Die’ — rewriting life, one scene at a time 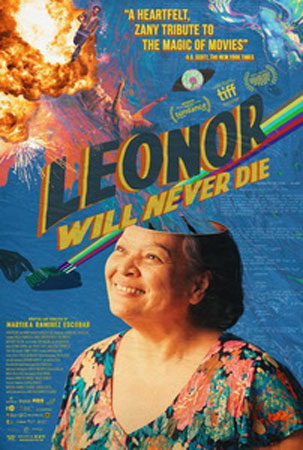 The agony of irrelevance might be commonly addressed in movies, but rarely with the lightheartedness of Martika Ramirez Escobar’s airy fantasy, “Leonor Will Never Die.” In part an affectionate ode to trashy action films, this debut feature gazes compassionately on Leonor, a once-celebrated, now retired Filipina genre director. Aging and depressed, Leonor grieves the death of her favourite son, Ronwaldo and lives with his feckless brother, Rudy, whose inability to pay the bills makes her feel like a burden. So when she learns of a contest for unproduced screenplays, she determines to revise one of her own; but before she can complete it, a freak accident leaves her unconscious. From there, like a choose-your-own-adventure, “Leonor Will Never Die” inhabits that unfinished story, an inventive revenge fantasy in which Leonor stars. Blood and bullets and pulpy dialogue alternate with more intimate scenes, the see-through ghost of Ronwaldo popping up now and then for a chat. The effect is by turns comical, maddening and endearing as Escobar reaches for more ambitious ideas about the political appeal of the authoritarian hero; but “Leonor” is finally too mired in its film-within-the-film frolics for more serious themes to gain traction.