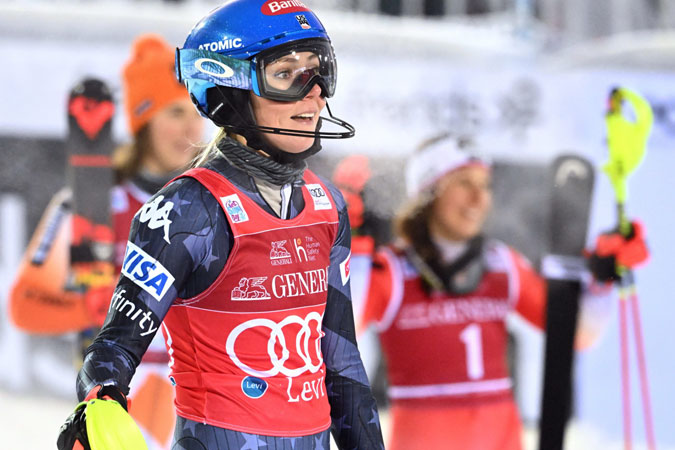 LEVI: US star Mikaela Shiffrin claimed her second slalom victory in as many days for a perfect start to the season on the opening weekend of the women’s alpine skiing World Cup in Levi on Sunday. The reigning overall World Cup champion finished 0.28sec ahead of Swiss Wendy Holdener with Olympic champion Petra Vlhova settling for third at 0.68sec. “I really didn’t expect today, even after the first run,” said Shiffrin after clocking the best time in the first run with a slim margin on her rivals. “There is a little bit of luck, but I’ve been working really hard on my preparation. “It’s never perfect or easy, but in the moments that I needed to be, I was tough,” said the American.

“I was a little bit nervous but I think that’s good. Every time I felt a heartbeat, I thought, ‘push harder’.” Shiffrin won the overall World Cup title for the fourth time in the spring, but was frustrated by a failed Olympic Games in February in Beijing with no medals in three events. But the 27-year-old from Colorado has managed the perfect start to the season with two victories in 24 hours in Finnish Lapland north of the Arctic Circle. The women’s giant opener in Solden, Austria was cancelled at the end of October due to excessive rainfall, before three successive competition weekends — two in Zermatt-Cervinia and one in Lech — were scrapped due to lack of snow.

Behind Shiffrin, Holdener climbed onto her 30th World Cup podium in slalom but still has no victory, an unfortunate record partly due to the American’s success. A flying second run had allowed the Swiss to dream of her first slalom victory. Last to start, Shiffrin pulled out all the stops with her accuracy on the steep sections giving her the speed to crush her rivals. It was Shiffrin’s sixth victory on the tough Levi Black piste, to move ahead of Slovak slalom rival Vlhova with the pair having won every women’s World Cup race in the Finnish resort dating back to 2015. Vlhova, the defending World Cup slalom champion, was far from her imperious best to finish third for the second consecutive day. “Mikaela this year is really strong, so if I’m going to beat her, I need to be perfect on both runs,” she said. “There are still lots of races ahead. I think it will be close all season.”