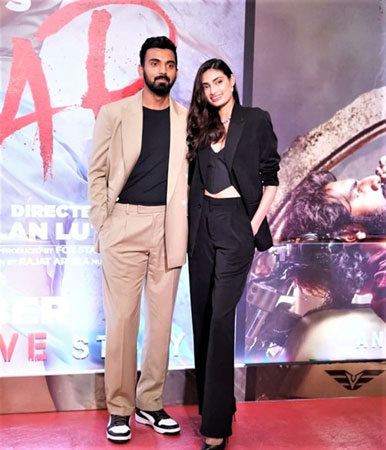 Suniel Shetty’s daughter and actress Athiya Shetty has been rumoured to be dating cricketer KL Rahul for the longest time now. They have reportedly been in a relationship for 3 years now. From planning vacations to collaborating professionally, the rumoured lovebirds have done it all and more. Now, there are speculations about their marriage doing the rounds on the internet. Amid the speculations, Suniel Shetty has opened up about the duo’s marriage. He has confirmed that Athiya and KL Rahul will exchange wedding vows soon.

Suniel Shetty recently launched the trailer of his upcoming project, Dharavi Bank, which will stream on MX Player. At the trailer launch event of Dharavi Bank, Suniel was asked about Athiya and KL Rahul’s wedding. When asked when the rumoured lovebirds would be getting married, Suniel said, “Jaldi hogi (it will happen soon).”

Only a few months ago, Athiya and KL Rahul made their relationship Instagram official. Though they haven’t been vocal about their love affair, they don’t shy away from social media PDA. When rumours of their wedding surfaced on the internet, Athiya was quick enough to react to it. “I hope I’m invited to this wedding that’s taking place in 3 months, lol (sic),” she wrote on Instagram.

On the work front, Suniel is currently seen in Dharavi Bank. He has shared screen space with Vivek Oberoi and Sonali Kulkarni. The official synopsis of the series reads, “A 30,000 Crore crime nexus is being ruled by the unattainable Thalaivan right in the heart of Mumbai, in Dharavi. JCP Jayant Gavaskar is on a mission to bring down Thalaivan and his adversaries, at any cost.” The web series premiered on November 19, 2022.