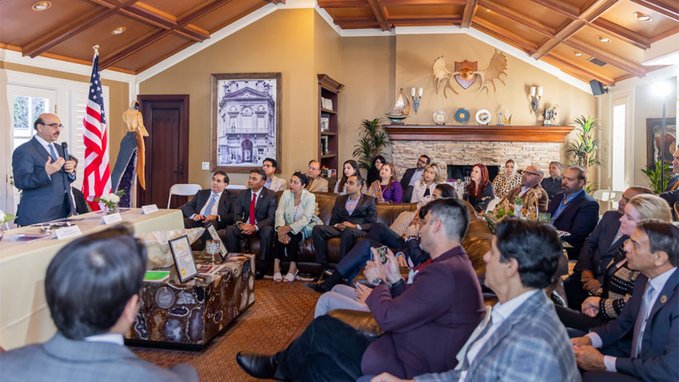 WASHINGTON: The momentum in the U.S.- Pakistan relations provides a window of opportunity for investors to strengthen economic partnerships between the two countries, Ambassador Masood Khan has said.

Addressing members of the Pakistani-American community in Los Angles, he referred to “positive developments” in the bilateral ties, and said that the two countries’ leadership had decided to collaborate more closely in the economic realm encompassing trade, investment, alternate energy, health, agriculture and tech industry.

The event was organized by the Council of Pakistan, a non-profit community organization devoted to promoting the interests of Pakistan and Pakistani Americans in the U.S, according to a press release issued by the Pakistani embassy here.

Ambassador Masood Khan lauded the exceptional achievements of Pakistani Americans in the U.S., particularly in the State of California. He said that they had made both Pakistan and the U.S. proud with their innovative and entrepreneurial spirit and acted as a strong bridge between the two countries.

The Pakistani envoy said that the diaspora could play an important role by scaling up their businesses in Pakistan. In this regard, he also urged them to play their role in increasing exports of IT products and services from Pakistan to the U.S. He noted that despite odds, trade volume between the two countries was growing as Pakistan’s exports to the U.S. jumped from US$ 7 to 9 billion last year.

Masood Khan also commended the active role of the Pakistani community in recently concluded congressional election in which they supported candidates from both sides.

He also thanked the community members for providing $ 4.7 million for Covid vaccines to Pakistan and contributing to flood relief efforts by donating US$ 1.5 million, out of which $ 1 million had already been remitted to Pakistan.

The ambassador also underlined the high priority attached by the Government of Pakistan to the welfare of overseas Pakistanis. He said that the Embassy of Pakistan in Washington D.C. and its four Consulates in Los Angeles, New York, Houston and Chicago remain committed to providing assistance to the Pakistani community in the U.S.

The leadership of the Council of Pakistan, including Chairperson Nighat Sarwat and Chairman Dr Adnan Khan said that the organization was working to build strong relations between Pakistan and the U.S. They also briefed on various initiatives taken by the Council to bring investment into Pakistan.

The ambassador highlighted the steps taken by the Government to improve business and investment climate in Pakistan, including liberalization of regulatory regimes, streamlining taxation and facilitating repatriation of funds.

He said that Pakistan, despite some challenges, was emerging as an economic hub in the region. Pakistani Americans could play an important role in building confidence in Pakistan’s economy by investing in key areas, including IT, alternative energy, agriculture, manufacturing and healthcare.