* The bride, 25, wore a white, caped embellished, tulle bridal gown with floral accents and a cathedral-length veil and the groom, 30, sported a black tux 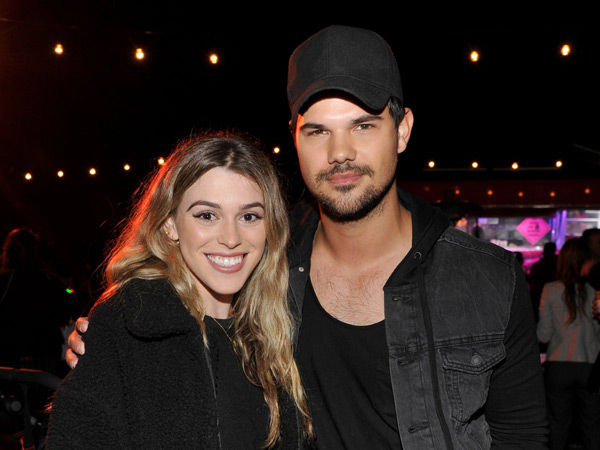 It’s a tale of two Taylors. Taylor Lautner and Taylor “Tay” Dome have gotten married after more than four years together and exactly one year after getting engaged.

The Twilight star and the registered nurse from California tied the knot on Nov. 11 under a canopy at Epoch Estate Wines near Paso Robles, California, according to People and other outlets. The bride, 25, wore a white, caped embellished, tulle bridal gown with floral accents and a cathedral-length veil and the groom, 30, sported a black tux. Photos of the couple posing outside with their wedding party, which included Jason Kennedy and wife Lauren Scruggs Kennedy as a groomsman and bridesmaid, were posted by the Daily Mail.

Dome and Lautner’s romance has been official since the actor posted a cute Halloween photo on his Instagram on Oct. 28, 2018. The lovebirds met when Lautner’s sister Makena Lautner Moore called him to tell him she had found his “future wife,” according to Today. Soon after, Lautner hosted a game night and invited Tay and his sister and the rest is history.

Three years later, he put a ring on it. “11.11.2021,” he wrote on Instagram as he shared photos of the emotional proposal. “And just like that, all of my wishes came true.”

Lautner confirmed that his fiancée would be taking his last name during an Aug. 12 appearance on The Kelly Clarkson Show. “We already share one name,” he told Kelly Clarkson. “We’re literally going to be the same person.”

Prior to walking down the aisle, Lautner, Kennedy and more friends celebrated the Scream Queens star’s bachelor party in Miami, Fla. Lautner shared some of the snaps from his bachelor weekend in his Instagram Stories on Oct. 24. His crew looked like they were having a good time jet skiing and taking in a Miami Heat basketball game from court side seats. Kennedy called it the “perfect end to the bachelor weekend.”

Earlier in October, Dome celebrated at her bridal shower. She shared snaps from the event on her Instagram, including one she captioned, “I can’t wait to marry you @taylorlautnerposed.” Lautner commented, “911: what is your emergency Me: my fiancée just posted pics.”

Even finding out his fiancée was Team Edward didn’t change Lautner’s mind.

Back in June, Dome took part in the social media challenge “show your childhood crush and the person you ended up with.” Her Instagram clip showed two snaps of Robert Pattinson as Edward Cullen before changing to a photo of Lautner-who played Edward’s rival Jacob Black in Twilight.