While going through our national history, we rarely find men of integrity with self-effacing qualities, who work silently and diligently towards their cause without drawing any undue attention to themselves. One such luminary is Sahibzada Farooq Ali Khan, who had the distinction of being the ninth Speaker of the National Assembly of Pakistan, following in the footsteps of distinguished men like Governor General Mohammad Ali Jinnah, Maulvi Tamizuddin Khan (twice), Abdul Wahab Khan, A K M Fazlul Quadir Chowdhury, Abdul Jabbar Khan, President Zulfikar Ali Bhutto and President Fazal Elahi Chaudhry.

Born in 1931, the young Farooq was embroiled in politics right from the 1946 elections and the demand for Pakistan while he had seriously joined politics during Ms Fatima Jinnah’s 1964 electoral campaign against President Ayub Khan. He later recalled how during one Multan meeting with Mian Mumtaz Daultana, she threatened to eliminate landholdings of the major feudal lords in case she made it to the presidency, despite all the odds. He recalled how the train from Chittagong to Dacca was delayed by 22 hours when Ms Jinnah boarded it, while people would kiss the tyres of her vehicle. Old men would weep on seeing an elderly woman fight against an all-powerful president, making her the symbol of resistance.

Then came the 1970 elections, which changed everything. But before that, he had joined Zulfikar Ali Bhutto as a founding member of the Pakistan People’s Party in 1967 and was instrumental in arranging the party’s first public meeting in Multan replete with considerable violence. Although born in a village near Wazirabad, Sahibzada Farooq Ali always contested elections from Multan, which became his home, except when he went hunting or visiting his lands, mostly located in Southern Punjab. In 1970, Zulfikar Ali Bhutto contested the election from six constituencies, including Multan, and Sahibzada Farooq was fully engaged in the campaign.

When Bhutto came to power, he held Sahibzada Farooq Ali in high regard and sent him to China in a goodwill delegation led by Nusrat Bhutto. Later, on the approval of the broad elements of the constitution, he was elevated to the exalted office of Speaker National Assembly from August 9, 1973, till March 27, 1977, after Fazal Elahi Chaudhry became the President under the 1973 constitution. He was succeeded by Malik Meraj Khalid after the March 1977 elections, who was later caretaker Prime Minister in 1990. 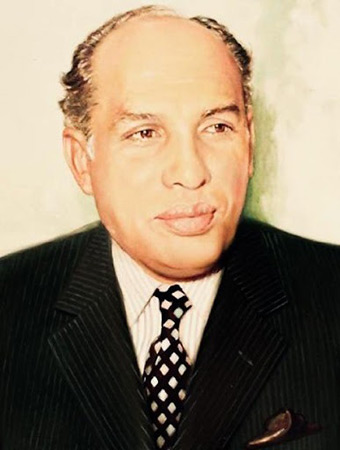 Along with Deputy Speaker Dr Mrs Ashraf Abbasi, Farooq Ali chaired the Special House Committee constituted to hold in-camera sessions to deliberate on the Ahmadiyya issue and ultimately declared the sect as non-Muslim on September 7, 1974. The proceedings have since been declassified and depict an intense level of detail entailed in the whole debate. He also served as acting President of Pakistan during August 1973, and it was during his tenure as Speaker that Prime Minister Zulfikar Ali Bhutto laid the foundation of the current Parliament House in Islamabad. He also convened the Speakers’ Conference under his leadership on an annual basis to keep the provincial assemblies on board, as warranted in a Federation. He showed the utmost respect for the Opposition benches yet had no qualms in getting three members ejected from the Assembly gate when they upset the decorum of the House.

Much later, he wrote his memoirs in Urdu with the translated caption: “Democracy Requires Patience.” He contended that change never comes easily but required consistent efforts. Towards the end, he mostly engaged in his law practice and was highly respected as a highly noble professional, both by the Bar and the Bench. Though he slept at around 1 or 2 a.m., he would be up by 6 a.m. and in the court by 8 a.m. positively. His driver was trained accordingly.

The 1973 constitution was actually approved under his leadership, and each sub-clause, clause and article were duly debated requiring the assembly members to rise and sit around 5,000 times at odd hours. Once, when the Leader of the Opposition Abdul Wali Khan spoke for two hours, Mr Bhutto, as Leader of the House, spoke for four hours and stopped only when he found Speaker Farooq Ali yawning. Ultimately, the constitution was passed unanimously with the exception of two abstentions; Bhutto’s estranged Law Minister Mian Mahmud Ali Kasuri and party dissident turned accuser Ahmed Raza Khan Kasuri.

Farooq Ali Khan always maintained that Zia’s hands were soaked with blood and would never accept any office.

During Ziaul Haq’s rule, his friend Lt Gen Hamid Gul tried every way to involve him in politics, but Farooq Ali Khan always maintained that Zia’s hands were soaked with blood and would never accept any office. During the party-less elections of 1985, Hamid Gul even offered to make him an MNA without contesting. When he was sceptical, he was told to contact the Commissioner of Multan. The latter candidly told him there were two men in the race and if he agreed to be MNA, they could both be made MPAs, and he could be elected unopposed. Sahibzada Farooq Ali retorted that he only wanted confirmation of Hamid Gul’s assertions and he had gotten them.

Concerning Bhutto’s execution, he interceded with the Chinese Embassy, which had already sent in a clemency appeal. He was then summoned to Rawalpindi jail to meet the condemned prisoner on April 1, 1979, so he reached Rawalpindi the earlier night. However, he was not allowed inside the prison for three days. On April 3, Begum Nusrat Bhutto and Benazir Bhutto were taken inside the jail from the backdoor to the prison and Farooq told everyone – “this is the last meeting!”

In his memoirs, he lambasted the defence counsels Yahya Bakhtiar and D M Awan for dwelling unnecessarily on the law of evidence for six months, by which time two acquitting judges had dropped out of the bench transforming a 5-4 verdict in favour to a 4-3 verdict against Mr Bhutto and alluded to some conspiracy there.

During Benazir Bhutto’s tenure in office, he provided her with moral support but refused any public office. On Farooq Leghari’s assumption of office as President of Pakistan in 1994, he predicted that he would dissolve the assemblies.

Till the very end, Sahibzada Farooq Ali Khan maintained a low profile and never sought publicity. He would get up late every night to fetch his favourite piece of “barfi” and this habit got him in the end. He suffered a bad fall and was bedridden for the last ten of his 90 years in this mortal life. He later developed Alzheimer’s Disease and passed on November 29, 2020. A life characterized by utmost honesty, credibility and integrity had ended and that is how posterity will always remember him. Sadly, the main inference drawn from the cumulative experiences of his long and eventful life remains that the more things change, the more they remain the same, reducing the possibilities of our amelioration!

The writer is a senior public policy specialist in Pakistan and can be reached at gnkaziumkc@gmail.com