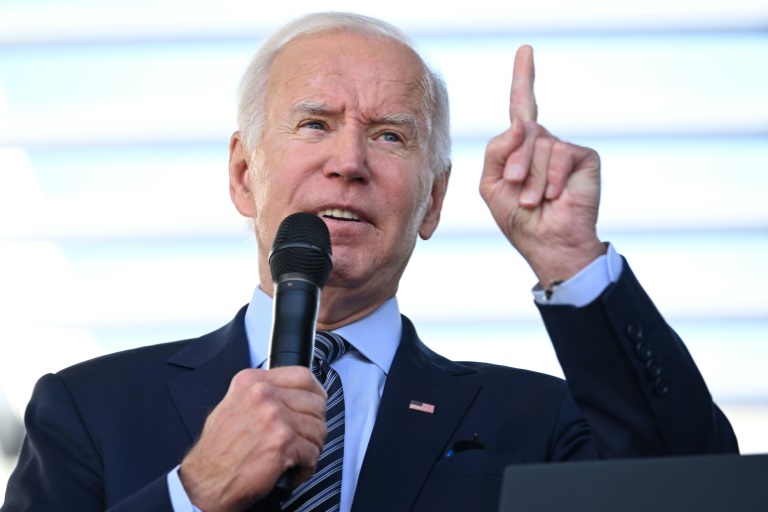 Joe Biden‘s Democrats seem to have escaped a feared drubbing in Tuesday’s midterm elections, but it remains to be seen whether that will revive the US president’s flagging fortunes until 2024 — or beyond.

The 79-year-old, who framed the race as a clash between defenders of democracy and the “extremist” camp of Donald Trump, spent election night in back-to-back calls with Democrats savoring their wins in Senate, House and gubernatorial races around the country.

“Just got off the phone with some of tonight’s winners — including some folks I saw on the road this year,” Biden tweeted as the results came in — alongside a picture of himself in a turtle neck and baseball cap, seeming happy to take at least some of the credit.

White House staff, according to the former press secretary Jen Psaki, were “giddy and gleeful” as results came in. The outcome taking shape was far from ideal for Democrats, who stand to lose the House of Representatives in what Biden has admitted will make his life much more “difficult” — likely hobbling parts of his agenda.

But if overnight predictions hold and the Democrats lose the House by a handful of seats, with the Senate still in play, Biden’s camp will have vastly outperformed expectations. The president’s party has traditionally lost seats in midterm elections and with Biden’s approval ratings stuck in the low 40s, and sky-high inflation topping voter concerns, Republicans had high hopes of seizing both chambers of Congress in a “red wave.”

Such a drubbing would have raised tough questions on whether America’s oldest-ever president, who turns 80 this month, should run again. Instead Biden stands to emerge in much better shape than either of his Democratic predecessors, Barack Obama or Bill Clinton, who both took a hammering at the midterms.

Nevertheless, Biden will be headed into choppy waters if the House flips. In a country whose divisions run deeper than ever, even a longtime senator and moderate Democrat like Biden will likely struggle to find common ground with a Republican-led chamber. Large parts of his legislative agenda could utterly stall as a result.

Another open question is whether a new Republican leadership would keep its promise to aggressively hold the president to account — which even a slim House majority gives it the power to do. That could easily translate into endless congressional investigations targeting Biden, his record and his family.

One of the loudest voices, far-right Representative Marjorie Taylor Greene, has already promised stepped-up scrutiny of Biden’s son Hunter, who Republicans accuse of exploiting his father’s connections to do business with Ukraine and China.

With control of the House, Republicans would also be able to apply considerable budgetary pressure on the president — with the potential to cut funding to the federal government. As for the Senate — which confers greater powers — its fate still hangs in the balance. But beyond, the big question facing Biden — and his Democrats — is who will carry the party’s colors into the 2024 White House race.

Until now the US president has consistently said he intends to seek a second term, and any suggestion to the contrary would have immediately undermined his authority. But there is little appetite among the US public or within his own party for a second White House run by an octogenarian commander in chief.

Biden leaves Friday on a diplomatic marathon taking him from the COP27 climate conference in Egypt, to Cambodia for an ASEAN summit, and on to Indonesia for the G20 gathering. The veteran Democrat may keep America guessing some time yet about his intentions for 2024.

But with the president far from US shores, his rival Trump will be pressing ahead  promising a big reveal, widely expected to be a new White House run, next Tuesday in Florida.