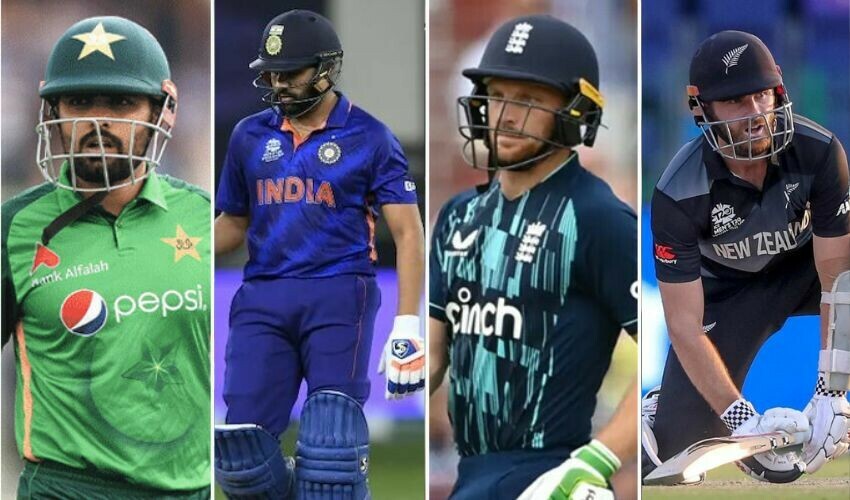 ADELAIDE: New Zealand play Pakistan in Sydney on Wednesday and India face England in Adelaide on Thursday in the semi-finals at the Twenty20 World Cup.

AFP Sport looks at the teams and their journeys into the final four:

The Black Caps had a resounding start to the tournament with an 89-run thrashing of defending champions and hosts Australia, setting the tone for their campaign so far.

A washout against Afghanistan did not stop their momentum. They thrashed Sri Lanka with Glenn Phillips smashing the second century of this World Cup with his 64-ball 104.

New Zealand faltered in their chase of 180 against England but regrouped to outplay minnows Ireland as skipper Kane Williamson struck form with a quickfire 61.

Last year’s beaten finalists topped the tougher of the two Super 12 groups on net run rate from pre-tournament favourites Australia and England to underline just how dangerous they are.

The 2009 champions had a heartbreaking start to their campaign when they lost a last-ball thriller to arch-rivals India, then suffered a shock defeat to Zimbabwe.

They looked dead and buried, and victory over the Netherlands was hardly impressive as they lost four wickets in their modest chase of 92.

But Pakistan conjured up a dominant performance to hammer South Africa and revive their semi-final hopes, and the Dutch did them a favour by stunning South Africa.

Azam’s form remains a worry however with the opener managing just 39 runs in five matches.

Jos Buttler’s team thrashed Afghanistan after they bundled out the opposition for 112 in their opener in Perth to justify their favourites tag in the tournament.

But a five-run shock loss via DLS method to Ireland and a washout against Australia put them on a sticky wicket.

The Three Lions came roaring back to outplay the Kiwis and star all-rounder Ben Stokes with an unbeaten 42 led them in a tense four-wicket win over Sri Lanka to propel them into the semis.

India set the tournament alight at a packed Melbourne Cricket Ground when over 90,000 fans witnessed Virat Kohli’s masterclass to overhaul Pakistan’s 159 on the final ball.

Kohli has excelled with three half-centuries to become the highest run-scorer in tournament history and India lost only once, to South Africa, en route to the semis as table-toppers.

T20 sensation Suryakumar Yadav has also been among the runs and with a tournament strike rate of 193.96 will be India’s key weapon in their bid for a first world title since the 2013 Champions Trophy.