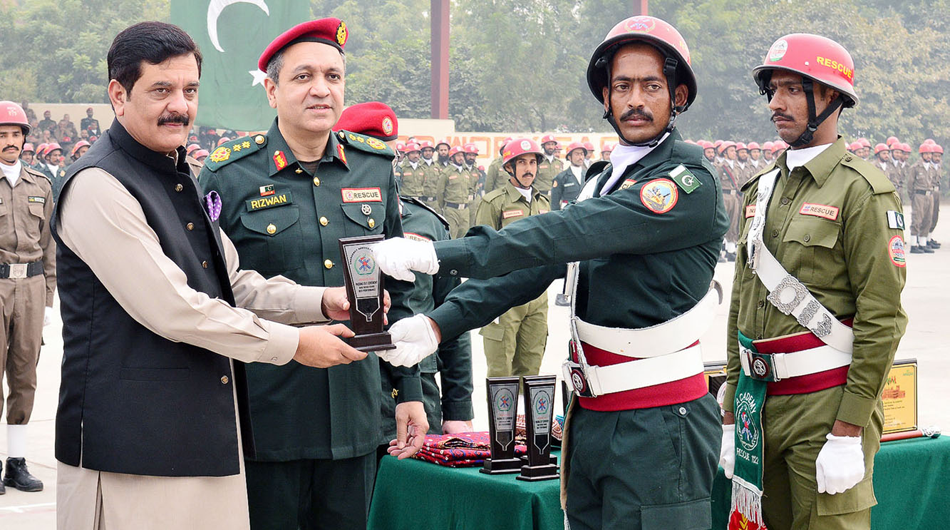 The passing out parade of basic rescue course especially organized for Baluchistan, Khyber Pakhtunkhwa and Sindh was held at the Emergency Services Academy (Rescue 1122), Lahore here on Saturday. The 381 Passing out Rescuers included 81 from Baluchistan, 193 from KP and 107 from Sindh. The KPK, Sindh and Baluchistan cadets were imparted four months of Emergency training according to their traits and they demonstrated their professional skills during the passing-out parade.

In his welcoming address, Secretary PESD Dr Rizwan Naseer took oath from 381 passed-out Emergency Services Personnel and congratulated them on the successful completion of their professional training and becoming part of this life-saving Emergency Service.

Dr. Rizwan Naseer said that Rescue 1122 had rescued over 11.16 million victims of emergencies since its inception in October 2004, the Fire Rescue Service has also responded to over 198000 fire emergencies and saved losses worth over Rs. 586 billion with professional firefighting on modern lines. The Emergency Services Academy has trained over 23000 emergency personnel for all provinces of Pakistan since its inception. The Academy is also assisting in the training of other countries i.e. Tajikistan, Syria, and Sri Lanka in urban search & rescue and Emergency First Responder and Community Response Courses. “The PESD is also providing technical assistance to all provinces through the Punjab Government to replicate the life-saving model of the emergency service. Now, this Academy also hosts the first United Nations INSARAG Classified team in South Asia to respond to national and international disasters, and calamities in accordance with international standards, which is an honour for Pakistan,” DG said.

Addressing the passing out ceremony on behalf of the Chief Minister Punjab, the Minister for Irrigation Punjab Muhammad Hashim Dogar congratulated passed-out rescuers and their families. He said that it is heartening to see the performance of Rescue 1122 and its excellent training facility. Rescue 1122 is one of the best institutions in Pakistan after Pak Army on which we can feel proud and present it at the international level. In fact, this credit goes to Chief Minister Punjab Ch. Pervaiz Elahi and Dr Rizwan Naseer whose continuous efforts saved millions of lives and are now providing training to other provinces and countries.

He congratulated the Sindh government for establishing the Rescue 1122 service in their province as this step would help to save lives in case of emergency and disaster. Hasim further said that the Government of Punjab through Emergency Services Academy is providing life-saving training and technical assistance to other provinces for establishment of Emergency Services to give the right of emergency care to every citizen of Pakistan without any discrimination.