LAHORE: The sixth round of the Quaid-e-Azam Trophy 2022-23 brought Balochistan their second win in the ongoing edition, thanks to Yasir Shah’s spellbinding display of leg-spin bowling which garnered him his fifth match haul of 10 wickets as title defenders Khyber Pakhtunkhwa crashed to a seven-wicket defeat. This was Khyber Pakhtunkhwa’s fourth defeat in six matches, meaning their hopes of winning the third title in a row are almost extinguished. They are at the bottom of the points table, as they have been for the majority of the season, and their other two contests have ended in draws. Fourth-ranked Balochistan, on the other hand, closed the gap with second-placed Sindh. Eleven points separate the two sides with Central Punjab, whose all six matches have ended in draws, placed third.

Northern, meanwhile, after being rescued by Rohail Nazir’s superlative 149 are the only team to have gathered more than 100 points and are placed first with 101 points. In their match against Southern Punjab, Northern faced a real possibility of being forced to follow-on, but the former Pakistan U19 captain batted his team out of trouble. Southern Punjab, placed fifth, had three centurions in the match. While Umer Siddiq and Salman Ali Agha made centuries in the first innings, Usman Salahuddin scored tons in both innings. Their teammate Mohammad Abbas breached the 600-first-class-wicket mark during his first five-wicket haul in the tournament.

Aamer Yamin displayed his all-round credentials for Central Punjab against Sindh, as he begun the match with a five-wicket haul and topped it up with four more scalps in the second, scoring a half-century in between. Sindh’s Saad Khan smashed his first century of the season, making 161. His teammate, Abrar Ahmed, continued to bamboozle the batters with his mystery spin. He took four wickets in the first innings and bowled 10 overs in the second, which lasted 37.

In the seventh round, which commences Wednesday (today), Sindh stay at the Pindi Cricket Stadium to host Southern Punjab at the Pindi Cricket Stadium. The contest will be beamed through PCB’s YouTube channel. Balochistan travel to Abbottabad from Multan to play Northern. Khyber Pakhtunkhwa and Central Punjab lock horns at the LCCA Ground in Lahore.

Top performers: Experienced Test batter Azhar Ali now has the most runs for the tournament with 580 at a handsome average of 96.67 and is followed by Khyber Pakhtunkhwa’s Sahibzada Farhan who is second on the list with 558 runs at 50.73 after his second-innings half-century against Balochistan. Southern Punjab’s Usman Salahuddin’s twin hundreds against Northern in Abbottabad has lifted him to third spot with 545 runs at an average of 60.56. The other two batters with more than 500 runs are Abdullah Shafique (537 at 67.13) and Hussain Talat (511 at 51.10).

There are no points for guessing the bowler with most wickets in the tournament as Abrar Ahmed’s sensational run has him 10 wickets clear of the joint second best bowlers on the list. The 24-year-old Sindh bowler has now accumulated 32 wickets at 19.06 despite playing only four matches. He has two four-fers, one of them coming in the last match, and four five-wicket hauls. Central Punjab’s Mohammad Ali and Northern’s Mubasir Khan are locked on the second spot with 22 wickets each. Ali has recorded two five-fers, while Mubasir’s only five-wicket haul of the tournament came against Southern Punjab in the last round. Right-arm medium fast bowlers Muhammad Umar of Sindh and Ihsanullah of Khyber Pakhtunkhwa are fourth and fifth on the list with 18 and 17 scalps.

Cricket Associations Championship 2022-23: Wednesday will also mark the beginning of the seventh round of Cricket Associations Championship 2022-23. The non first-class four-day tournament sees second XI teams of the six Cricket Associations participate. Top-ranked Central Punjab, who have won four out of six matches, will take on Khyber Pakhtunkhwa, who are third, after winning two and losing three, at the NBP Sports Complex, Karachi. Second-placed Sindh and fifth-ranked Southern Punjab will play at UBL Sports Complex. Bugti Stadium in Quetta will stage the match between Balochistan and Northern. Balochistan are ranked fourth and Northern and placed at the bottom. 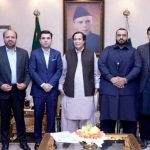