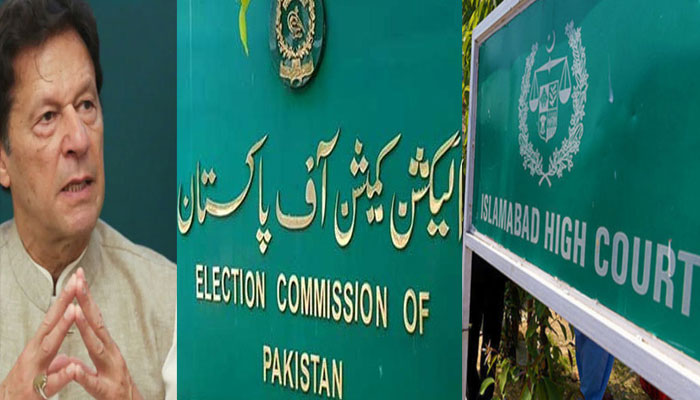 On Monday, the Islamabad High Court (IHC) reserved a ruling on the appeal against Imran Khan’s disqualification in the Toshakhana reference and stopped the election commission from holding a by-election on the seat of Mianwali, where Imran was removed by the ECP.

Barrister Ali Zafar pleaded with the court to put off its ruling on Imran Khan’s disqualification.

Meanwhile, Justice Aamer Farooq said: “We are not suspending the decision of the election commission. We are barring the by-election.”

The court sought a reply from the election commission on November 10.

Barrister Ali Zafar and Ali Gohar appeared before the court on behalf of Imran Khan.

The court approved the miscellaneous petition of Imran Khan to make the documents part of the record.

“The election commission has de-seated the petitioner,” Barrister Ali Zafar argued before the court.

“From which seat was the petitioner de-seated?” the court inquired.

“Did this reference come from the National Assembly speaker under 63/2?” the court inquired further.

“The reference came from the National Assembly speaker and the election commission disqualified the petitioner under Article 63(P),” Barrister Ali Zafar told the court.

“Can the National Assembly speaker de-seat a member if he finds out that the member has been convicted. Was this reference made by the speaker himself or did someone submit a request? Did he say in the reference that you are no longer Sadiq and Amin, and therefore we are sending the reference?” the court inquired further.

The court inquired whether the returns were submitted by all the members of the National Assembly annually.

Barrister Ali Zafar replied that the members of the national and provincial assemblies and the Senate had to submit returns every year.

“If someone has sold something, it does not need to be submitted or disclosed. In case of non-submission of returns, the assembly membership is suspended,” he added.

In August 2022, National Assembly Speaker Raja Pervaiz Ashraf sent a reference to the ECP under Articles 62A, 63A, and 223, seeking former prime minister Imran Khan’s disqualification in the light of the Toshakhana scam.

The disqualification reference was filed by Ali Gohar Khan, PML-N’s Mohsin Nawaz Ranjha, and five others.

The 28-page reference identified 52 gift items of Toshakhana received by the former prime minister Khan, violating the law and rules, taken away at nominal prices and most of the gifts were sold in the market, including some precious watches.