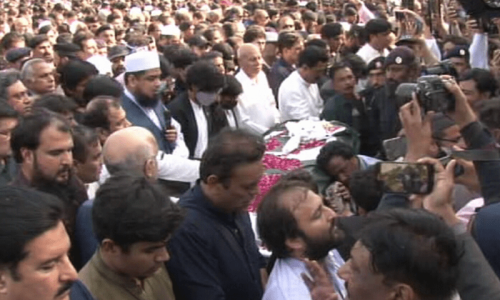 Arshad Sharif’s funeral prayer was offered at Faisal Mosque in Islamabad on Thursday amid tight security. He was laid to rest at the H-11 cemetery of the federal capital.

Arshad was shot dead in Kenya allegedly by the local police on Sunday night, with an official police statement later expressing “regrets on the unfortunate incident” and saying an investigation was underway.

Kenyan media initially quoted the local police as saying Sharif was shot dead by police in a case of “mistaken identity”.

A statement released by the National Police Service of Kenya later confirmed that the incident occurred last night along the Kwenia farm/Kamukuru Marram road within Magadi, where “a foreigner namely Arshad Mohammed Shariff (sic), a Pakistani national aged 50 years was fatally wounded by a police officer while a passenger in a motor vehicle KDG 200M.

“At the time of the incident, the deceased was in the company of his brother namely Khurram Ahmed. The Incident follows a circulation from Pangani Police of a stolen motor vehicle. The officers trailing the motor vehicle towards Magadi alerted police in Magadi who erected a road barrier,” it said.

At his family’s request, an eight-member medical board of the PIMS hospital carried out the postmortem on his body at the hospital. An ENT surgeon and an OMFS surgeon were also included in the team of doctors at the family’s request.

The PIMS medical board also conducted an X-ray and CT scan of his body at the hospital.

Sources said that the initial postmortem report is expected to be released today.

Professor Hashim Raza of the PIMS hospital said that forensics of the samples sent to the laboratory may take some days.