The real reason Matthew Perry and Julia Roberts broke up

* In an excerpt obtained by UK newspaper The Times, Perry, 53, revealed that the two started dating shortly after Roberts, 54, signed on to guest star on the '90s NBC sitcom 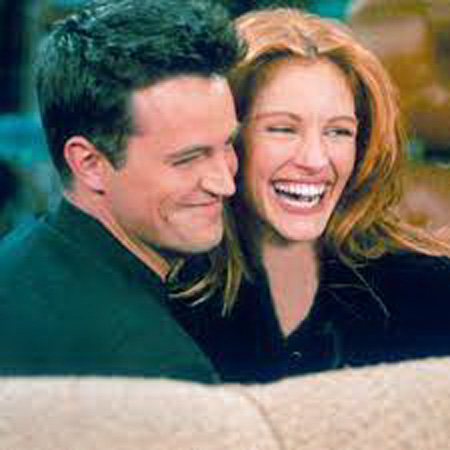 Matthew Perry is an open book when it comes to his past relationships. The Friends alum got candid in his forthcoming memoir, Friends, Lovers and the Big Terrible Thing, about his former two-month romance with Julia Roberts. In an excerpt obtained by U.K. newspaper The Times, Perry, 53, revealed that the two started dating shortly after Roberts, 54, signed on to guest star on the ’90s NBC sitcom. However, he wrote that the Pretty Woman actress “would only do the show if she could be in my story line,” adding that he “had to woo her.”

Perry said he sent Roberts three dozen roses and a note that read, “The only thing more exciting than the prospect of you doing the show is that I finally have an excuse to send you flowers.”

The pair then began “a three-month-long courtship” by sending each other faxes, and their platonic relationship quickly evolved into a romantic one.

The 17 Again actor detailed meeting Roberts’ parents for the first time when the actress flew him to Taos, New Mexico, to ring in the New Year with her and her family. Right before the clock struck midnight, Roberts took Perry to a special place to get a good view of the city. “We jumped in this big blue truck and drove up a mountain, snow swirling around,” he wrote. “Eventually we reached a mountaintop, and for a moment the weather cleared, and we could see New Mexico and beyond, all the way back to Canada. As we sat there, she made me feel like the king of the world. A gentle snow was falling, and with that, 1996 began.” However, Perry soon let his own thoughts get the best of him, ending his relationship with Roberts two months later. “Dating Julia Roberts had been too much for me,” he admitted. “I had been constantly certain that she was going to break up with me. Why would she not? I was not enough; I could never be enough; I was broken, bent, unlovable. So instead of facing the inevitable agony of losing her, I broke up with the beautiful and brilliant Julia Roberts.”

Perry’s memoir Friends, Lovers and the Big Terrible Thing will be available Nov. 1.