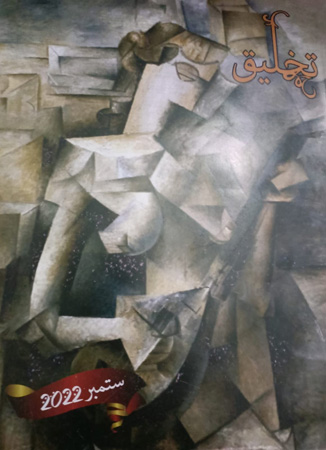 It has been a decade since Sonan Azhar Javed has kept the legacy of his father alive by continuously publishing the literary magazine which his father Azhar Javed started 54 years ago.

Inside the cover of the magazine contains the photographs of the literary persons who visited the office of monthly Takhleeq in the month of September 2022. Memories are therefore preserved.

The corner that captured this reviewer’s attention was a tribute by many writers and poets on the famous poet and educationist Dr. Akhtar Shumar who died recently. Veteran intellectual Khwaja Muhammad Zakariya recalled when he accepted Akhtar’s thesis topic on Bedil Haideri a disciple of Khayyam Al-Hind Haider Dehelvi for Akhtar Shumar’s doctoral degree. Akhtar even visited India for collecting some material on Bedil Haideri. On this visit this reviewer happened to be in the group that visited India (Ludhiana and Delhi). We also went to Chandigarh. The Pakistani delegation comprised Dr. Hasan Rizvi and Hasan Sultan Kazmi. We were joined by Murtaza Barlas and Khalid Iqbal Yasir. Dr. Akhtar Shumar and Zahid Fakhri were popular poets in the Mushaeras held in these cities. Dr. Khwaja Muhammad Zakariya also hailed Akhtar’s creative works on criticism and in research works (Pages 8-9). Veteran journalist Sarfaraz Syed who is fondly known as Shah G says that Akhtar loved Shahzad Ahmad’s couplet ‘Rukhsat Hua Tau Ankh Mila Kar Nahi Gaya’ (when he left he avoided looking into my eyes). That is exactly how Shah Saheb felt when he heard of Akhtar’s demise. He disclosed that Akhtar was deeply interested in Sufism also though his poetry didn’t have any shadow of this interest. Shah Sahib disclosed that they used to hold long telephonic conversations on Sufi poets. According to Shah G Akhtar’s poetry comprised mainly love poetry like is seen in the couplet ‘Mujh Ko Apne Marne Ka Gham Nahi Laikin/Heye! Main Tujh Sei Bicher Jaun Ga’ (I am least mournful on my death but in the process I shall lose you). Hussain Majrooh regrets Akhtar’s demise because Akhtar became aware of his liver cancer only a few months before his demise. Rejecting his blood tests he had told his family not to reveal his ailment to his friends whenever they visited his house or telephoned him. They were constantly told that he was taking rest from his job as HOD Urdu Department in FC College Lahore (Page 13). Nobody could imagine that a tall handsome personality with amiable disposition was talking about his permanent rest. This reviewer recalled when he was also a part of the delegation visiting India and UK the former on the invitation of Mr. Malhotra and the latter that of poet Sabir Raza of Carvan-e-Adab in Manchester UK.

Essays have been written on varied subjects – Pages 35 to 61. Dr. Mubarak Ali throws light of the problem of Jews in his essay ‘Yahudi Mas’ale Ka Tajzia’ (Analysis of Jewish problem). He explains the reasons of the hatred of the Europeans with Jews with reference to the book ‘The Origins of Totalitarianism’ by Hannah Arendh where she has discussed Nazi Germany and Russia. She belonged to a Jewish family in Germany. She did her PhD in philosophy from Berlin University. In the Europe of that time lending money on interest was not in vogue due to the influence of the Church. However it was felt that business could not be run without taking interest on your investment. So the leaders of that time invited Jews to start their business in Europe. In no time Jews got settled and started lending money on heavy interest rates to their customers. In this scenario since Jews did not cooperate in the development process of the country where they lived hatred against this community developed. The rich and politicians used to borrow lot of money from the Jews making the masses deprived from a decent life style. This scenario became the root cause of French Revolution. The writer also gives the scenario why the powerful lobbies created a small state namely Israel in the midst of Muslim countries. Instead of living in harmony with the local Arabs this community started attacking Palestinians. This situation still prevails.

Veteran writer Mahmud Shaam talks about the menace of large companies sponsoring even literature now exhibiting their logos during the sports and literary events (Page – 38). Hence the multinational Companies are fast becoming patrons of literature – a fact unacceptable to the writer. Dr. Tahira Iqbal discusses the role of women in Urdu literature in her essay titled ‘Urdu Adab Main Aurat Ka Kirdar’ (A woman’s role in Urdu Literature). It was till Maulana Hali days that the Urdu literature was devoid of any role of a woman in Urdu literature; importance and character-wise. If some writer dared mentioning womenfolk it was in derogatory terms. Time changed. Many female intellectuals emerged. Many women have been mentioned by Dr. Tahira Iqbal who created masterpieces in their respective domains of Urdu literature.

Khalid Iqbal Yasir in his essay ‘Kutch Tarjume Kei Baare Main’ – some things about translations)’ lays emphasis on the quality of translations that can lead to transferring the message of the writer in their language or break their hearts by wrong translations/interpretations conveying wrong image. This corner includes a very interesting essay by Dr. Ghafir Shahzad questioning the role of a computer in poetry titled ‘Computer Ab Waqei Shaairi Karain Gei’ (will computer do poetry now?).

The other essays are by Dr. Ashaq Virk and Shujaat Ali Rahi. Also included are essays by Aftab Khan and Sabir Zafar. September 2022 issue of monthly Takhleeq includes corners on poems and Ghazals. Satire and humorous writings have been contributed by Dr Muhsin Maghiana and Dr Badar Munir. A very interesting review is contributed by Prof. Saadat Saeed on the impact of these poets on us (Page 131). He refers to the book on this subject by Dr. Muhammad Rafiq who is considered a poet and travelogue writer with reverence but the essay mentioned here falls in the domain of criticism. The monthly Takhleeq also contains book reviews by Aftab Khan thus making this particular issue of the journal under review a perfect sequel to its previous issues.