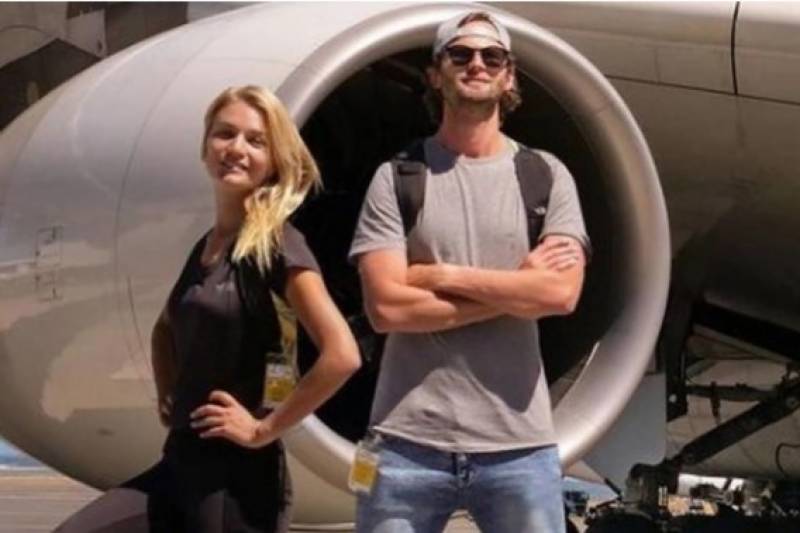 Two travel bloggers from New Zealand who disappeared in Iran for almost four months are “safe and well” having fled after secret talks between the two governments, Wellington revealed Wednesday.

Newlyweds Bridget Thackwray and Topher Richwhite crossed from Turkey into Iran in early July, when their social media feeds — usually filled with glamorous and carefully curated shots of them in exotic locations — fell silent.

For months, some of the couple’s 300,000 fans posted increasingly anguished messages asking about their safety, with no reply. At the same time, the New Zealand government refused media requests to comment on their whereabouts.

On Wednesday Prime Minister Jacinda Ardern broke her silence, revealing that officials had been “working hard” for several months to “ensure the safe” exit of the couple, who had endured “difficult circumstances”.

The exact details of the couple’s time in Iran remain unclear.

Iranian officials told AFP that the couple had been neither detained nor arrested, and the New Zealand government was careful not to imply any formal captivity.

Westerners are frequently taken into custody by Iran’s hardline government — which has been at loggerheads with the United States and its allies since the 1979 Islamic Revolution.

Detainees have languished in jails or been released after intensive behind-the-scenes negotiations.

Many releases have included prisoner swaps, leading to accusations that Tehran is engaged in “hostage diplomacy”.

Most countries advise against any travel to Iran.

“Topher”, short for Christopher, who is in his late thirties and is the son of one of New Zealand’s wealthiest bankers, toured with a band before the couple started their world tour.

His wife Bridget, in her late twenties, founded the fashion website Fashbae in 2017, the year before they began travelling.

They travelled in an American-made Jeep 4×4 named “Gunther” after German traveller Gunther Holtorf, who visited 215 countries in 26 years before his death in 2021.

In a July video post that was later removed from social media sites, Richwhite said the couple had been stopped at the Iranian border, where the vehicle was inspected. They were instructed how to dress and behave in a tense 45-minute meeting with guards.

“They never stay in the same place in the middle of nowhere for this long,” Los told AFP. “Because they share photos and video so openly and often, it was obvious to me that something was wrong.”

This week Kylie Moore-Gilbert, an Australian who spent more than 800 days in Iranian jails before being released, reported that the couple were missing.

Moore-Gilbert hailed confirmation that the couple had exited Iran as “fantastic news.”

The pair’s disappearance echoed the plight of British-Australian travel bloggers who were held in Iran in 2019, on suspicion of spying and circumventing sanctions, but who were later released.

At the same time, Australia halted the extradition of Reza Dehbashi to the United States.

A PhD student at the University of Queensland, Dehbashi had been detained on allegations of “attempting to purchase and transfer advanced American military radar equipment via Dubai to Iran”.

Ardern did not provide details of the negotiations but insisted she had not shied away from criticising Iran’s recent bloody crackdown on young protesters — many women, objecting to strict Islamic law and authoritarian rule.

“We called in the Iranian ambassador to share our views directly,” she added.

Her government has diplomatic ties with Iran and has had an embassy in Tehran since 1975 making it New Zealand’s longest-standing Middle Eastern outpost.

Iran has repeatedly accused outside forces of stirring up the protests, and in late September announced that nine foreign nationals — including from France, Germany, Italy, Poland and the Netherlands — had been arrested.

“A student may die but will not accept humiliation,” they chanted at Shahid Chamran University of Ahvaz, in the southwestern province of Khuzestan, in an online video verified by AFP.

Young women and schoolgirls have been at the forefront of protests sparked by Amini’s death last month, after her arrest for an alleged breach of the Islamic republic’s strict dress code for women.

The 22-year-old Iranian of Kurdish origin died three days after being taken into custody by the notorious morality police on September 13 while visiting Tehran with her younger brother.

Activists said the security services had warned Amini’s family against holding a ceremony and not to ask people to visit her grave Wednesday in Kurdistan province, otherwise “they should worry for their son’s life”.

Wednesday marks 40 days since Amini’s death and the end of the traditional mourning period in Iran.

State news agency IRNA published a statement it said was from the family, saying that “considering the circumstances and in order to avoid any unfortunate problem, we will not hold a ceremony marking the 40th day”.

Activists said the statement was made under pressure and that tributes were nonetheless expected at Amini’s grave.

Online videos showed students protesting Tuesday at Beheshti University and the Khaje Nasir Toosi University of Technology, both in Tehran, as well as Shahid Chamran University of Ahvaz.

The fresh demonstrations came after activists accused security forces of beating schoolgirls at the Shahid Sadr girls vocational school in Tehran on Monday.

“Students of the Sadr high school in Tehran have been attacked, strip-searched and beaten up,” said the 1500tasvir social media channel.

“Parents later protested in front of the school. Security forces attacked the neighbourhood and shot at people’s houses,” it added.

The education ministry said a dispute erupted between schoolgirls and their parents and school staff after the principal demanded they comply with rules over the use of mobile phones.

“The death of a student in this confrontation is strongly denied,” a ministry spokesman said, quoted by Iran’s ISNA news agency.

Families were seen clamouring for information outside the school in Tehran’s Salsabil neighbourhood, in an online video verified by AFP.

The group, which monitors rights violations in Kurdistan, also tweeted that Iranian football stars Ali Daei and Hamed Lak were in Saqqez as they “want to take part in the 40th day funeral” and were staying at the Kurd Hotel.

But they “had been taken to the government guesthouse… under guard by the security forces”, Hengaw said.

Daei has previously run into trouble with authorities over his online support for the Amini protests.

Such reports have fuelled further anger over the crackdown that Iran Human Rights said, in an updated toll Tuesday, had cost the lives of at least 141 protesters.

Deadly unrest has hit not only Kurdistan — but also the city of Zahedan in the far southeast. IHR said 93 people were killed in demonstrations that erupted on September 30 over the reported rape of a teenage girl by a police commander.

Despite what rights group Amnesty International has called an “unrelenting brutal crackdown”, young women and men were again seen protesting in online videos on Tuesday.

“Death to the dictator” and “Death to the Revolutionary Guards”, women chanted in Tehran metro stations, in videos shared on Twitter.

Students heckled the spokesman for ultraconservative President Ebrahim Raisi as he addressed Tehran’s Khaje Nasir University, in a video published by the reformist paper Hammihan.

Teachers observed a strike around the country Sunday and Monday over the crackdown, and another work stoppage was said to be under way in Kurdistan on Tuesday.

Amnesty says the crackdown has cost the lives of at least 23 children, while IHR said Tuesday at least 29 children have been killed.

There has also been a campaign of mass arrests of protesters and their supporters, including academics, journalists and even pop stars.

State media said Tuesday that more than 210 people were charged in connection with the protests in Kurdistan, Qazvin and Isfahan.