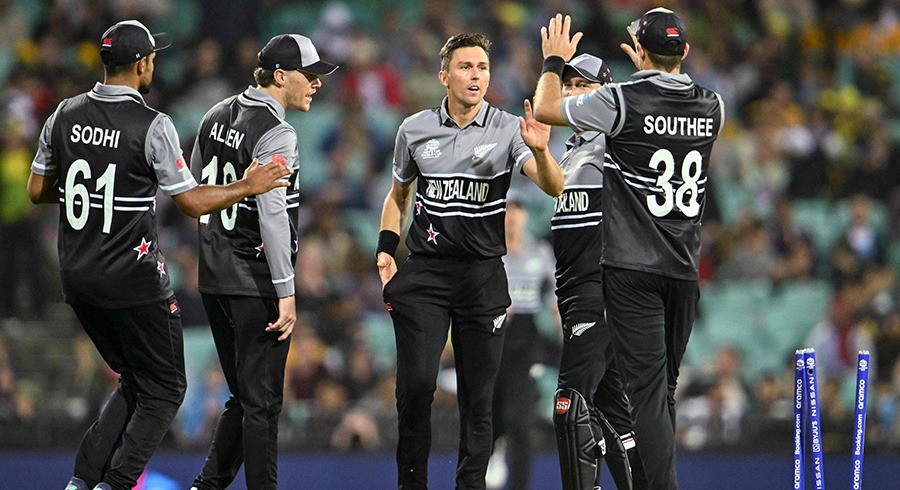 Devon Conway carried his bat with a majestic unbeaten 92 to help New Zealand blast 200-3 before Australia were skittled for 111 in Sydney to make a nightmare start to their title defence.

Conway’s knock came from just 58 balls with seven fours and two sixes, joining a select group to make 90 or more at a World Cup. Mitchell Santner and Tim Southee both took three wickets each.

The match at a sold-out Sydney Cricket Ground was a repeat of the 2021 final in Dubai when Australia powered to an eight-wicket win and maiden crown.

Aaron Finch’s men now have their work cut out to match the feat in a tough Group 1 with Afghanistan, England and qualifiers Ireland and Sri Lanka awaiting them. Only the top two make the semi-finals.

New Zealand got off to a sensational start after Finch sent them in to bat, with Finn Allen cracking two fours and a six off Mitchell Starc’s opening over.

Not to be outdone, Conway then crunched two blistering boundaries off Josh Hazlewood as the Black Caps plundered 29 from the first two overs.

Adam Zampa dropped Allen in the next over as Pat Cummins was similarly punished, taken for 17.

But the young right-hander’s luck ran out when Hazlewood returned and the wily pace spearhead bowled him for 42 — off just 16 balls — as he charged down the crease.

The introduction of Marcus Stoinis and Zampa helped stem the run flow, but Conway brought up his 50 with a six off the spinner Zampa, who trapped Kane Williamson (23) lbw in the same over.

Hazlewood removed Glenn Phillips for 12 before Jimmy Neesham hit a six off the final ball to reach 200.

Australia’s chase started badly when David Warner, the player of the tournament in the 2021 event, fell for three in the second over, dragging the ball onto his stumps off Southee.

Finch (13) hit a giant six off Trent Boult but didn’t last much longer, striking Santner straight to Williamson at cover as his miserable form continued.

It was a similar story for Mitchell Marsh, briefly hitting big to make 16 before being caught by Neesham going for another slog to leave Australia teetering at 34-2 in the fifth over.

Phillips pulled off one of the catches of the tournament so far to remove Stoinis for seven, leaping full length to his left as he ran from deep cover.

And when the big-hitting Tim David, preferred to Steve Smith, became Santner’s third wicket, out for 11, it was all but over at 68-5 in the 11th over.

Matthew Wade (two) and Glenn Maxwell (28) were their last hope with the tailenders offering little resistance.

Australia next meet Sri Lanka in Perth on Tuesday while New Zealand face Afghanistan in Melbourne a day later.