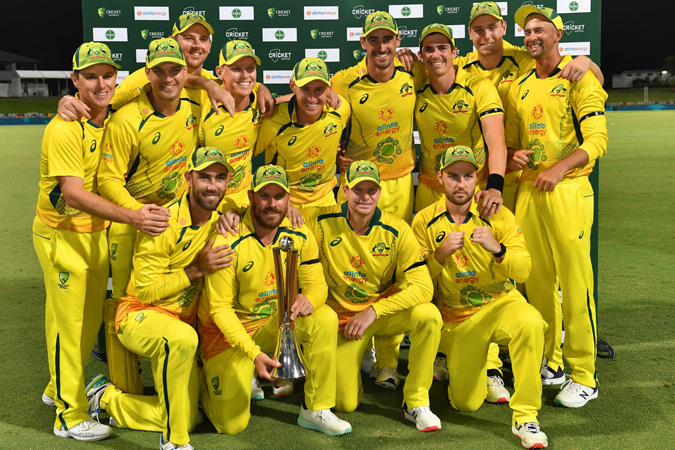 MELBOURNE: Defending champions Australia have had a patchy buildup to their T20 World Cup defence but few would dare underestimate Aaron Finch’s men when they flick the switch to tournament mode this week.

An underdone Australia gelled superbly during last year’s triumph in the United Arab Emirates and 14 of that 15-man squad will bid for back-to-back titles on home pitches over the next few weeks.

Since blanking twice champions West Indies at the start of the month, Australia have lost two warm-up matches to England and another against India in Brisbane on Monday as selectors tinker and players are rested.

Finch made a welcome return to form with a half-century against India, though, and Australia had another burden lifted on Tuesday when Pat Cummins was confirmed as captain of the one-day side, an issue that threatened to become a distraction through the tournament.

Despite mild concerns over the fitness of Mitchell Marsh and the form of fellow all-rounder Glenn Maxwell, Australia bring a balanced lineup with no discernible weak links.

Tim David, the sole new face in the squad, adds a different dimension to a powerful batting lineup and tactical flexibility as a hard-hitting finisher in the lower middle order.

Apart from David, who has effectively relegated Steve Smith to the bench, selectors will likely opt for continuity as Australia bid to become the first nation to win back-to-back.

Selectors’ faith in the fast bowling trio of Cummins, Mitchell Starc and Josh Hazlewood was rewarded at the UAE, and they will be reluctant to break them up in Australia.

Spinner Adam Zampa, joint second-highest wicket-taker in last year’s showpiece with 13 victims, will be backed to deliver again as the ideal foil to the pace trio.

Finch and fellow opener David Warner will set a familiar platform through the powerplay, with Marsh, the hero of last year’s final win over New Zealand, to continue at number three.

Kane Richardson is a more-than-handy back-up seamer in the squad, while Cameron Green is a keen all-rounder outside of it.

Australia will look to make a statement against New Zealand in their Super 12 opener at the Sydney Cricket Ground on Saturday, a repeat of last year’s decider.

A thumping win against the Black Caps, a team they have dominated on home soil for over a decade, would build confidence for what could be a pivotal clash against England in Melbourne the following week.