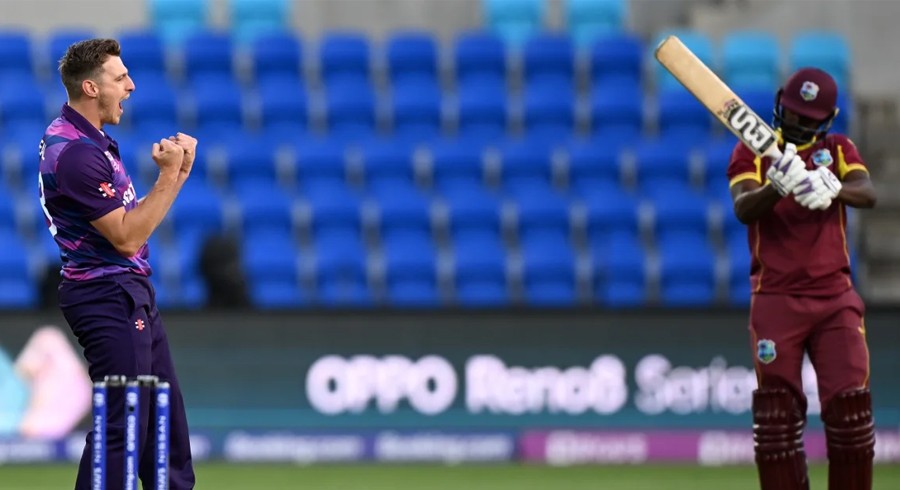 The shock result comes a day after Namibia hammered Asia Cup winners Sri Lanka in the tournament opener in Australia.

Munsey’s 53-ball 66 laced with nine boundaries steered Scotland to 160-5 after being put in to bat first in the opening-round match in Hobart.

Minnows Scotland are on course for a second straight Super 12 place after achieving the feat last year.

“Obviously it is a special win for us. Took a lot of work and has given us belief,” said Scotland skipper Richie Berrington.

“We haven’t had as many T20 cricket as we would have liked but have played a lot of 50-overs cricket. It was about transferring those skills to the short form.”

Munsey, a left-handed batsman, and Michael Jones got Scotland off to a flier as they raced to 52 in 5.3 overs when rain interrupted play.

Munsey hit a string of boundaries including three straight fours off Alzarri Joseph, whose first over at a T20 World Cup cost 15 runs.

The 45-minute rain break seemed to hit the batting momentum as Jason Holder bowled Jones for 20 soon after play resumed and then sent back Matthew Cross for three in his next over.

Munsey, named man of the match, stood firm and attempted to rebuild with Berrington, who got a good start but fell on 16 off Joseph.

Munsey, playing his 54th T20 for Scotland, reached his first T20 World Cup fifty after a cameo by Calum MacLeod, who smashed 23 off 14.

Munsey finished with a flourish as he hit three fours in a 15-run 20th over from Odean Smith.

West Indies now have no margin for further error if they are to progress to the Super 12 stage.

“We have to work hard and win two games. We have to take accountability and responsibility.”

Kyle Mayers started aggressively in the West Indies reply with three boundaries but mistimed a hit to be caught out by Munsey off pace bowler Josh Davey.

Evin Lewis and Brandon King hit back with a flurry of boundaries in their attempt to get quick runs in the first six overs of powerplay — when only two fielders are allowed outside the inner circle.

But their stay was shortlived as left-handed Lewis fell for 14 and King was bowled by Watt, who returned figures of 3-12 from his four overs, for 17.

Scotland’s bowlers kept chipping away as the rest of the West Indies batting caved in, despite a valiant 38 by Holder, who was the last man out.