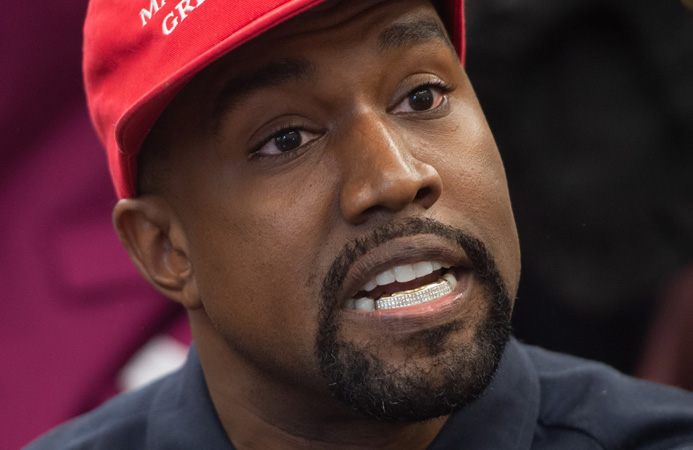 New York: Kanye West has long been one of the entertainment industry’s most polarizing figures, but his recent actions including anti-Semitic comments and white supremacist messaging have alienated fans and business partners alike.

It’s another problematic turn for the rapper and fashion mogul once hailed as an artistic genius, but whose stubborn contrarianism has seen him start conflating hate speech with free speech.

The latest controversies which erupted during Paris fashion week and after an interview with Fox News add to his reputation as a chaos agent, one that has tarnished his musical and fashion talent.

The 45-year-old Kanye West, who in the past has unironically compared himself to Michelangelo, broke out in 2004 with “The College Dropout,” building a masterful music career that saw him imbue rap with soul and electronic elements to create his lush albums.

His mercurial ways drew some critics but for years his celebrity earned him a pass.

At times his comments garnered him praise for his honesty: in 2005, he called out George W. Bush’s handling of Hurricane Katrina, delivering an urgent plea for help during a televised fundraising concert before saying “George Bush doesn’t care about Black people.”

But in the decades that followed his musings grew increasingly bombastic and controversial.

After the rollercoaster rollout of his album “The Life of Pablo,” West, who has talked openly about struggling with bipolar disorder, suffered a mental breakdown, disappearing from the public eye.

In late 2016 he reemerged, strolling into Trump Tower to meet the then-president-elect.

He made waves as a rare celebrity to support the Republican billionaire, whose four years in the White House were mired with repeated accusations of racism and sexism.

In 2018, West met with Trump in Washington for a surreal tete-a-tete that included a hug between the two and an on-camera rant.

And during the 2020 election West, who later legally changed his name to Ye, his longtime nickname, launched his own unsuccessful bid for the American presidency as an independent candidate of the Birthday Party.