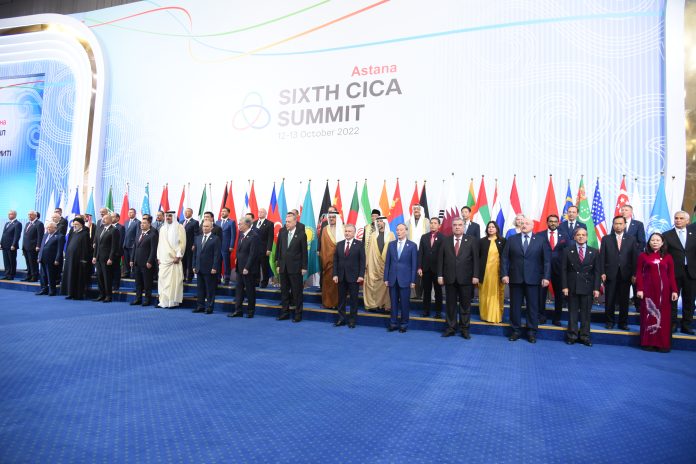 ASTANA (KAZAKHSTAN): Prime Minister Shehbaz Sharif on Thursday joined the world leaders as the 6th Summit of the Conference on Interaction and Confidence Building Measures in Asia (CICA) began in Kazakhstan’s capital Astana.

PM Sharif on his arrival at the Palace of Independence the venue of CICA summit, was warmly welcomed by Kazakhstan’s President Kassym-Jomart Tokayev.

The prime minister along with other heads of State and government had a group photograph before the summit was opened.

Information Marriyum Aurangzeb in a tweet said PM Shehbaz Sharif had meaningful interaction with leaders of various countries at the venue of CICA Summit.

The prime minister will soon be addressing the plenary meeting of CICA, where he will elaborate upon the significance of CICA as a unique forum for promoting interaction, understanding, and collaboration amongst countries across Asia to address common challenges.

He will also highlight Pakistan’s perspective on regional and global issues.

CICA is an intergovernmental process comprising 27 countries from all across Asia.

Established in 1992, it focuses on promoting peace, security, and socio-economic development in the Asian continent. Pakistan is one of its founding members.

CICA offers an invaluable platform for advancing the objectives of regional stability and prosperity through dialogue and win-win cooperation.

Prime Minister Shehbaz Sharif arrived in Kazakhstan on Wednesday to attend the two-day 6th Summit of the Conference on Interaction and Confidence Building Measures in Asia (CICA) in capital Astana.

He is accompanied by Defence Minister Khawaja Asif, Information Minister Marriyum Aurangzeb, Minister of State for Petroleum Musadik Malik and other government representatives.

“Leaving for Kazakhstan today to attend the 6th Summit of the Conference on Interaction and Confidence Building Measures in Asia (CICA). I believe CICA is capable of shaping a new configuration of economic cooperation and security in Asia through greater connectivity,” shareef tweeted prior to his departure.