Pakistan, Azerbaijan to collaborate on energy 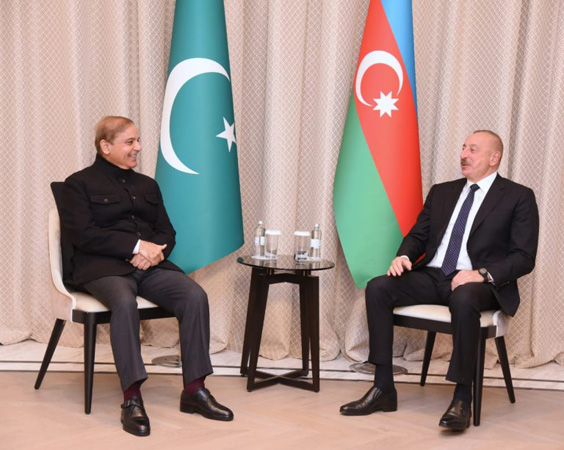 Pakistan and Azerbaijan on Wednesday agreed to hold fast-track discussions on energy collaboration between the two countries through robust engagement. The bilateral relations were discussed in a meeting between Prime Minister Shehbaz Sharif and the President of Azerbaijan Ilham Aliyev in which the two sides renewed their commitment to intensify and deepen bilateral engagement in diverse areas of mutually beneficial cooperation. The meeting took place on the sidelines of the Sixth Summit of Conference for Interaction and Confidence Building Measures in Asia (CICA) being held here. Both leaders reviewed the progress of various ongoing initiatives for promoting connectivity, trade and investment. During the meeting, the prime minister underlined the need for fostering close cooperation between the two countries in the field of energy, which was a high-priority area for his government.

Shehbaz Sharif informed the Azeri president that he had nominated the Minister of State for Petroleum as the focal point for bilateral energy cooperation between Azerbaijan and Pakistan who visited Baku during the last month. He also proposed leadership-level consultations in Islamabad aimed at advancing Regional Connectivity which was received positively. Both leaders reviewed the close and cordial bilateral ties, with a view to further enhance cooperation in the areas of trade, investment, education, information technology, security, agriculture, connectivity and energy.

The prime minister also briefed President Aliyev on his government’s efforts to rehabilitate the millions of flood-affected people in Pakistan and restore their livelihoods, damaged by the unprecedented climate change-induced natural disaster. He underscored that damage to standing crops and the inability to cultivate in the upcoming sowing season had exacerbated the threat of food shortage in the country.

He said the import of urea was essential to avert this danger and revive the agricultural produce in the country. President Aliyev assured him of Azerbaijan’s full support in this context. The two leaders also discussed regional and global issues of common interest.

Prime Minister Shehbaz appreciated Azerbaijan’s steadfast position on Jammu and Kashmir and its valuable role as a member of the OIC Contact Group on Jammu and Kashmir. He reaffirmed Pakistan’s principled support to Azerbaijan on former Nagorno-Karabagh and appreciated President Ilham Aliyev’s endeavors for bringing long-term and sustainable peace in the South Caucasus.

This was the second interaction between the two leaders as earlier they met on the sidelines of SCO in September 2022 at Samarkand, Uzbekistan and afforded a productive opportunity for catalyzing multifaceted bilateral economic engagement in keeping with the great tradition of amity and cooperation.