Continuous protests in Swat after attack on school van

SWAT: Thousands of people took to the streets for another consecutive day on Tuesday, demanding the arrest of culprits behind the attack on a school van in KP’s Swat district yesterday.

A sit-in protest was staged on the main Kalam-Swat road blocking the artery for traffic.

Locals in Mingora claim that terrorists from banned outfits were behind the attack, although no terrorist group has yet taken responsibility for the attack.

Meanwhile, the Private School Management Association (PSMA) announced the closure of schools in the district on Tuesday and participated in a civil society protest at Nishat Chowk. 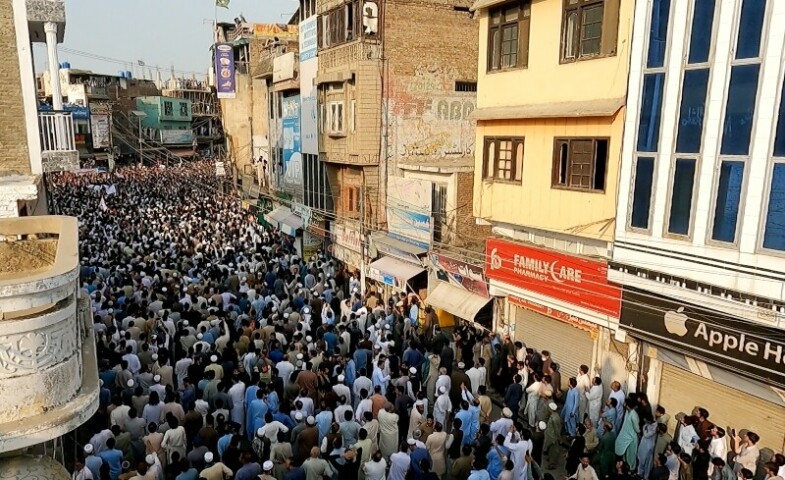 A driver of a school van was killed and two students were injured when their vehicle came under attack by unidentified gunmen in Guli Bagh village situated within the Khyber-Pakhtunkhwa’s (KP) Swat district.

Defence minister concerned over law and order situation in KP

Speaking on the floor of the house, Khawaja Asif said that the provincial government was responsible for maintaining law and order situation. “Armed forces rendered countless sacrifices to establish peace in the country.”

He recommended holding a debate in the house on the law and order situation of the KP province.

Earlier it was reported that after nearly two days of protests, the family members of the slain van driver — who was killed in an attack a day earlier — ended their sit-in following successful negotiations with the district administration.

Thousands of people took to the streets of Mingora after unidentified men shot dead the van driver and left a student critically injured — and so far, no organisation has taken responsibility for the attack.

During the protests, the family members of the deceased — along with thousands of people — demanded an end to terrorism amid rising fears of degradation in the city’s law and order situation.

Following the negotiations, the district administration said that the deceased driver’s family would be compensated, and one of his family members would be awarded a job.

Thousands protest in Swat after attack on school van#arynews https://t.co/UMuCD8sd1C