“The dignity of an independent judge nor his or her integrity is so frail and vulnerable so as to be harmed by a tweet on the social media platform” read the order of the Chief Justice Islamabad High Court, as it affirmed the objection qua maintainability of the contempt petition filed to lay before the […]

“It is by the goodness of God that in our country we have those three unspeakably precious things: freedom of speech, freedom of conscience, and the prudence never to practice either of them.” Mark Twain certainly did not contemplate a Pakistani society when he wrote these words but they resonate with present day Pakistan. When […] 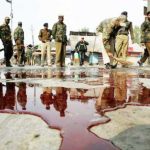 Where roses run blood I Kashmir is a saga of unspeakable horrors. In a tale that has metamorphosed for over centuries and climaxed each time into a tragedy, there are only victims.  But if one were to identify a villain –  of all the invaders, usurpers and colonial megalomaniacs, Nehru stands out. He emerges as […]

“Have you ever really had a teacher? One who saw you as a raw but precious thing, a jewel that, with wisdom, could be polished to a proud shine? If you are lucky enough to find your way to such teachers, you will always find your way back.” This beautiful excerpt from “Tuesdays with Morrie” […]

On Thursday, December 12, 2019 I woke up early to go through the formulations again on a brief I had worked on late last night. These matters were remanded from the Supreme Court after its recent ruling in a similar case. It’s a Herculean task to argue a remanded matter before the High Court when […]

Maryam has transformed the party of patronage; one that palmed on rent-seeking into one of resistance. For the first time since the formation of PML faction led by Shareefs, the party, in its posturing, has challenged the establishment. While for many, this transformation isn’t ideological, Maryam has still breathed a new soul into a party […]

The courts in Pakistan have paid little attention to the principles of deference while expanding on their Constitutional jurisdiction. This expansive approach, with little regard to underlying principles of separation of powers, has manifested in most, if not all areas of law, that the superior courts have touched. Deference is a requirement of comity that […]

Courts are just one, albeit an important institution, for dispute resolution. There are several other formal structures in a state, as part of the justice system, that operate to settle disputes. These include; tribunals, ombudsman, committees within the parliament, different grievance rederessal forums in autonomous bodies provided in special laws, including quasi-judicial powers vested under […]