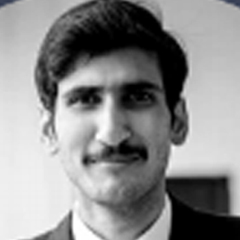 The writer is an engineer-turned development practitioner. He can be reached at muneeb.barlas@gmail.com

8-year old Asifa Bano had been brutally raped and murdered by a gang of Hindu men. Her body was left to rot in a forest for three days. When she was finally discovered and news of her murder broke out across India, the country’s Hindu community not only refused to condemn the incident but shamelessly […]

India’s cancellation of the scheduled meeting between Shah Mehmood Qureshi and Sushma Swaraj hardly comes as a surprise. For Indians to walk away from dialogue is nothing new. Neither are the absurd reasons given for the cancellation of the meet. When the Indians don’t want to talk, they fabricate excuses, no matter how bizarre they […]

“From now on, victory will have a clear definition: attacking our enemies, obliterating ISIS, crushing Al-Qaeda, preventing the Taliban from taking over Afghanistan, and stopping mass terror attacks against America before they emerge”, a confident Donald Trump had announced a year ago while laying out his South Asia strategy. A year on, ISIS is not […]

“Unless the United States starts respecting Turkey’s sovereignty and proves that it understands the dangers that our nation faces, our partnership could be in jeopardy”, Turkish President Recep Erdogan wrote in an op-ed published in the New York Times. The friendship between Turkey and the United States, while not always easy, is now at its […]

“International politics, like all politics, is a struggle for power”, says Hans Morgenthau. In this struggle for power, states are either impelled to act alone or obliged to form alliances to achieve common objectives. In the quest for power in Asia, the United States and India have embraced each other in a strategic relationship that […]

In July 1973, the Marcos regime in Philippines approved the construction of the Bataan nuclear power plant. The plant was financed through loans and the contract for constructing it was awarded to America’s Westinghouse Electric. The company had earned the contract not because of their professional excellence but due to President Marcos’s personal ties to […]

When ZA Bhutto was sentenced to death in a 4-3 verdict of the Supreme Court, BBC radio’s Urdu service was the first to broadcast this news with an unusual slant that all four judges in favour of the sentence belonged to Punjab. Britain cleverly sowed the seeds of distrust between Sindhis and Punjabis through shrewd […]

The China Pakistan Economic Corridor (CPEC) has come to symbolise a strong bond of friendship between the two countries. Pakistan has ardently welcomed Chinese investment under CPEC and described it as a sign of the brotherly relations between Beijing and Islamabad. However, in international politics friends and foes are determined by national interest. The same […]

Vanayak Damodar Savarkar must be a very happy man today, if only he were alive. India is ambitiously embarked upon the path of Hindutva —Savarkar’sbigoted doctrine that envisages a Hindu Rashtraor Hindu nation.The SanghParivar, a confederation of terrorist Hindu nationalist organisations, is at the vanguard of this movement. This dogma is spreading across Indian society […]