PARIS: Maria Sharapova’s fellow players described her as inspirational and praised her fighting spirit following the Russian’s announcement of her retirement from tennis at the age of 32 on Wednesday. The injury-plagued Sharapova, renowned for her never-say-die approach to the sport despite regularly being hampered by shoulder problems, won five Grand Slam titles. World number […] 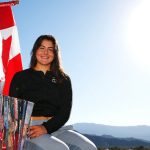 Canadian teenager Bianca Andreescu’s Indian Wells triumph was not shown on television in her home country but that did not dampen the excitement across a nation where the future of women’s tennis is suddenly looking as bright as ever. Andreescu enjoyed an unprecedented run in the California desert where the 18-year-old became the first wildcard […]