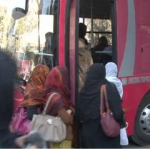 Today, women’s Safety in Public Transport is a highly crucial issue globally and most importantly in parts of Global South including Indo-Pak subcontinent. It is highly imperative to understand that travel needs of men and women are to a certain extent poles apart. In a developing country like ours, many women are forced to remain […]

The recent outbursts by Donald Trump, a Republican front-runner presidential candidate, have created a stir amongst the Muslim expatriate community, including Pakistanis. Trump has called for “a total and complete shutdown of Muslims entering the US”. Before this, he had suggested the registration of Muslim Americans and strict surveillance of their mosques. In the prevailing […]