Our family never migrated from India during the 1947 Partition. However, I heard from my parents that there was a reasonable population of Siraiki speakers who migrated to India in 1947. This sounded like a folk legend until through academic research, I also discovered that a majority of this population was settled in Delhi, Lucknow, […] 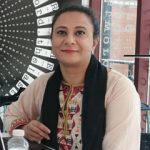 Shaukat Mughal — a Siraiki intellectual and well-established writer — passed away a few weeks ago at the age of 72. He had done a Master in Urdu degree from Multan. He was born and brought up in Multan and spent his entire life in his family home at Pak Gate Multan (near Musa Pak […]