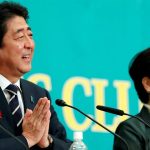 Japan’s new opposition Party of Hope led by popular Tokyo Governor Yuriko Koike may have some of its hopes dashed in the general election on October 22 if newspaper opinion polls on voter preferences are accurate. A raft of surveys released this past week suggest the current coalition government led by Prime Minister Shinzo Abe’s […]

AND so now it’s Toshiba Corp. Another giant brought to its knees from the ranks of Japan’s corporate behemoths that once ruled the world. Toshiba’s shares have lost about half their value since the company said last month it may face a writedown at its US nuclear power business, a piece of bad news that […]