Saba Karim Khan on the journey of writing, publishing and finding your song

* In an exclusive chat with Daily Times, the writer talks about her debut novel, supporting fellow authors, her upcoming works and travelling to Kashmir 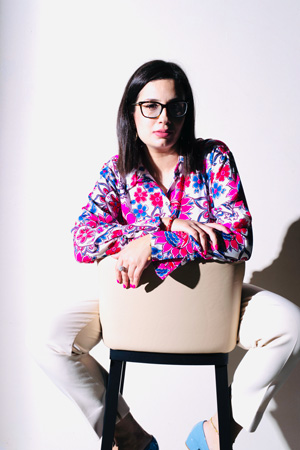 First of all, tell us a bit about your journey. When did you realise that you wanted to be a writer?

I grew up in Karachi, in a home filled with hand-written letters, books, ghazals and an abundance of dreams, where a lot would be traded materially for an intellectually or spiritually uplifting experience and where storytelling was a staple. So, in a strange way, we were misfits, because we never really learnt how material things can buy happiness, but rather, were constantly being fed the power of unleashing one’s imagination-a dangerous sort of idealism almost! My father was a professor of English Literature and growing up, he would speak to us of three books that he had scripted in his head; most Saturdays were spent at the British Council library; and so, somewhere, my dreams became intimately bound with those of my father. I began craving storytelling, even old-fashioned musings around a campfire, for they forge an interface with other beings and let you create something together. Gradually, however, the demands of daily life, chasing that “check-at-the-end-of-the-month”, started taking over and creativity became adjunct to this much more mechanical roster. It wasn’t until one rather luminous moment, much later in my work life, that things stirred up a bit. It was one winter at NYU Abu Dhabi, when I heard a guest speaker rehash a version of Henry David Thoreau’s words, which became a water-shed: “Most men and women lead lives of quiet desperation and go to the grave with the song still in them,” he said. “What’s your song?” He asked us to take five minutes and scribble our song on a piece of paper, before sharing it with the person sitting next to us. Of course, it felt unnerving, nearly impossible, trying to conjure up something so consequential in a matter of minutes, especially because in addition to my pipedreams, I had two tiny daughters: a one-year-old and a 2.5-week-old. Nonetheless, the Headmaster’s words left an indelible imprint on me and helped me shed some of my trappings, making me realize that storytelling was, in fact, my song. Storytelling was a portal, an invitation to walk or dance, which would allow me to keep the fire alive, to live for my eulogy and not just for my resume and to touch people’s lives in profound, intimate ways. The seeds of Skyfall were sown that morning.

Your debut novel, Skyfall, tackles some very important themes. The protagonist, Rania, is often referred to as a ‘Troublemaker’. What was the significance of this term in a culture that is steeped in misogyny and shaming? How does it help explain Rania’s journey?

This idea of the “Troublemaker” is one that I’ve been wrestling with for a while, the indiscriminate use of this label, especially for women in South Asia. If you are wearing red lipstick, you’re a Troublemaker, if you ask too many questions, you’re also a Troublemaker, if you don’t fit the cookie-cutter mould of the “good girl”, you’re definitely deserving of the title. I would often think, in fact still do, about how it is that one comes to be labelled a “Troublemaker” and why the title is mostly reserved for women? Are there good kinds of trouble you could be making? Why do Troublemakers evoke a moral panic in places such as Pakistan? Following from these questions, Rania’s character is emblematic of the daily battles that I, along with so many other girls, was wrought in, growing up in Pakistan-navigating and searching for one’s identity, amidst a totalitarian culture of silencing that has become dangerously normalized, especially for women. Where talk about female sexuality is highly stigmatized, where women’s desire and bodies are a kind of ruin, a site for contestation, which makes people incredibly nervous. It’s against this deeply patriarchal tapestry that Rania’s character surges and explores the possibility of transgressions, of pushing back, of thwarting social and moral expectation. I was interested in this question of, what price do you pay, especially as a girl, woman, “other”, in a society such as Pakistan, for unearthing your song, for having a beautiful, brown mind, for exercising agency, in short, for being a “Troublemaker” with a capital T-especially in contexts where we expect women to be completely disempowered and dumbed down, such as Heera Mandi. And how you do it whilst being vulnerable, flawed and brutally real and keeping the flicker of hope alive?

What do you think of the state of publishing in Pakistan? Do you think there’s more that can be done to improve things, and make sure that authors earn a decent income? Do you feel that Pakistani authors are close to earning a living exclusively from writing?

The needle is moving, we’ve seen a few new publishing houses spring up and even support fresh Pakistani voices, so that’s encouraging, but I think there’s a lot more distance to be covered. Not only is writing, economically unviable for most writers, but there’s a number of other challenges, such as the lack of literary agents, editing services, promotions and publicity that Pakistan lacks. Simply printing a book won’t cut it; publishing is a dynamic, 360 endeavour and it’s only when the other elements go hand-in-hand with it, that storytelling soars. Now, especially with the book ban with India, it’s even more imperative that we produce an organic publishing industry in Pakistan, one that offers our writers local avenues with global outreach to tell their stories. That’s also likely to have a knock-on effect on introducing new voices and encouraging people to attempt writing and publishing in Pakistan-which is crucial, if we want to carve out a unique identity for Pakistani storytelling and get a seat at the table.

You are known not just for your rich, evocative writing, but also for your support for fellow authors and artists. In fact, you regularly set up proper filmed interviews to promote others. This is a rare quality in a person. Do you think authors can coexist happily in an industry that is becoming increasingly cutthroat?

Well, you’ve certainly set that precedent for me, right from the time you wrote a blurb for Skyfall! Quite honestly, I think I got in with a lot of preconceptions about the lack of community among writers; some of those myths have been happily debunked and I’ve found genuine allyship and support from other Pakistani writers, be that yourself or Osman Haneef, Sabyn Javeri or Usman T. Malik and quite a few others, including Mohsin Hamid and even the late Sara Suleri. Even outside of Pakistan, there’s been much camaraderie, from the likes of Tishani Doshi, Miguel Syjuco, our dear friend Alan Gorevan and so many American authors as well, especially at the time Skyfall was up for publication. That felt incredibly special, as some of these were writers whom I was reaching out to for the first time with Skyfall, and they were so giving with their time, their reactions, just their interest in a story from Pakistan. Personally, I’m always curious about poking the creative minds of other storytellers, their craft, what keeps them up at night, those sorts of quirky questions, which is why I enjoy keeping conversations alive through interviews etc. myself-it makes the entire endeavour feel a lot less solitary but also, listening to other artists lets me learn much more than any formal school could. But all this is not to completely white-wash the intellectual boundary-making that does exist. I feel that there is still room to democratize the space among South Asian writers; if we want to create a thriving local literary industry, we will need more than a handful of storytellers who feel genuinely included and recognized for their craft.

What’s next for Saba Karim Khan?

You know how much I love visual storytelling so I’m in the pre-production phase of my next documentary and hope to begin filming later this year!

Nothing can come between sweet snacks and me!

Coffee or chocolate? Which one of these is a writer’s friend?

Some form of caffeine, usually a cup that takes me from 9am to 2pm!

London or Abu Dhabi? Which city inspires you more?

Ah, that’s interesting! London but over the past few years, I’ve struck a sort of unpredictable, emotional resonance with the UAE. We mostly hear of the glitz, glamor, synthetic lifestyles here. But it’s in its lesser-known spaces and movements, where you’ll find invisible, everyday stories, the ones that rarely get seen or told. The UAE feels like a portal, through which so much variety passes: food, culture, languages, a cocktail, which this place is under recognised for in storytelling.

Who are your favourite authors?

If you had a free pass to visit any country in the world, which one would it be?

Hopelessness. Losing the power to seek light over darkness.

The writer is a graduate of the University of Western Ontario and Durham University. He has studied Creative Writing from Oxford University, Writer’s Bureau UK and Bishopsgate Institute London. He can be reached at k_awais2003@hotmail.com and Tweets at @AwaisKhanAuthor