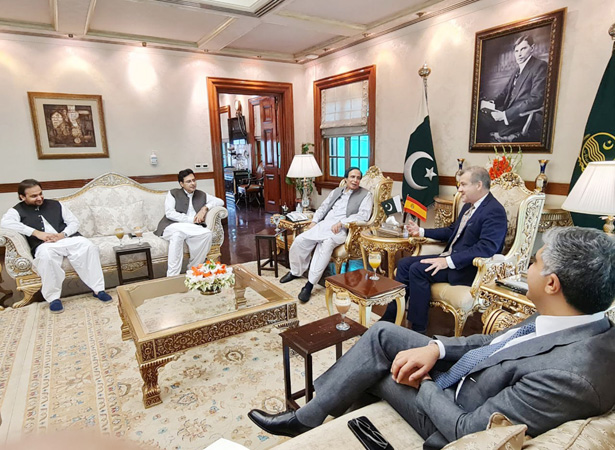 Spanish Ambassador Mr Jose Antonio De Ory Peral met Chief Minister Punjab Chaudhry Parvez Elahi, former federal minister Moonis Elahi and Hussain Elahi MNA at the Chief Minister’s Office today. In the meeting, matters of mutual interest and increasing cooperation in various sectors were discussed and it was agreed to increase cooperation in commercial, industrial and agricultural sectors. Spain will provide technical assistance to increase the cultivation of olives, oranges and other citrus fruits in Punjab. Chief Minister Parvaiz Elahi said that cooperation will be promoted with Spain in the fields of agriculture, alternative energy, textiles, livestock and mass transit.

We welcome the offer of technical assistance from Spain in various fields. We will provide all necessary facilities to the Spanish investors in Punjab. There are immense opportunities for foreign investment in Punjab, he added. The Spanish ambassador said that Chief Minister Parvez Elahi’s vision for the welfare of the people of Punjab is admirable.

He also paid tributes to the Pakistani community in Spain. I appreciate the services of Chief Minister Parvez Elahi for the high quality of the Rescue 1122 service, he said. The possibility of acquiring Spanish aeronautical technology to start an air ambulance service in Punjab and launching of Spain’s latest mass-transit system in different cities of Punjab were reviewed. Honorary Consul ofSpain in Lahore Jalal Salahuddin, Principal Secretary to Chief Minister Muhammad Khan Bhatti and chief secretary were also present.

A delegation of the Pakistan Broadcasters Association met Chief Minister Punjab Chaudhry Parvez Elahi and former federal minister Moonis Elahi at the Chief Minister’s Office to discuss their problems. The CM assured them to resolve their problems on a priority basis. The delegation included association chairman Mian Amir Mahmood, vice chairman Mir Ibrahim Rahman, secretary general Shakeel Masood and board member Tahir Khan. Chief Minister Parvaiz Elahi said that we have always raised our voice for freedom of the press. I am committed to the principles of tolerance and respect in politics; he added and stressed that national institutions are our dignity and they shouldn’t be made controversial. Respect for institutions is mandatory for everyone. Meanwhile, Pakistan’s media industry has developed at a fast pace and the role of media isof key importance in the current situation, he noted. The solution to the problems Pakistan is going through is in consensus and unity. I am striving toresolve public problems to give relief, he added. The secretary information and DGPR were also present.

A meeting was held under the chair of Chief Minister Punjab Chaudhry Parvez Elahi at his office which was attended by Special Assistant Dr Muhammad Afzal, assembly member Ch. Muhammad Ahsan, SMBR Zahid Akhtar Zaman, PrincipalSecretary to CM Muhammad Khan Bhatti, former principal secretary GM Sikandarand MD Cholistan Development Authority Mehr Muhammad Khalid while deputy commissioner Bahawalpur participated through video link. On the orders of Chief Minister Parvez Elahi, a plan has been devised to give government lands in the expanse of Cholistan to 20 thousand local farmers for temporary cultivation fora period of five years in a transparent manner. The CM stated that the draw for the allotment of the first phase will be conducted by the Punjab Information Technology Board; while another five thousand farmers will be allotted temporary lands in the second phase. This government would resolve Cholistan farmers’ problems on a priority basis; he said and hoped that this initiative would boost the agri economy in the area. The people of Cholistan have an equalright to resources and allotment of lands to the landless farmers will change their future, he concluded.

Chief Minister Punjab Chaudhry Parvez Elahi has expressed grief and sorrow over thedeath of factory workers in a traffic accident on Raiwind Road and extended sympathies to the bereaved heirs. He has sought a report from the IG police and directed that the responsible driver be brought to justice while the injured be provided with the best treatment facilities.