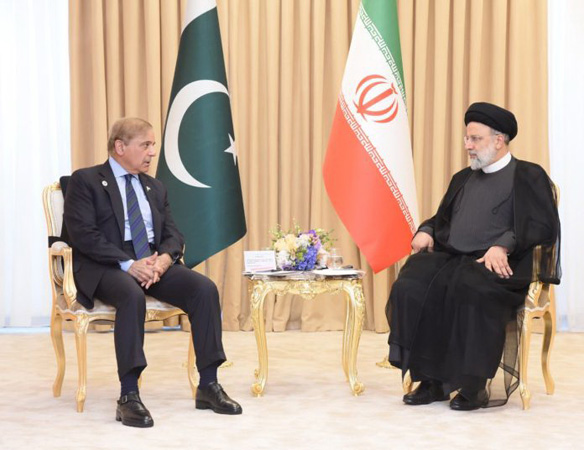 During the meeting, held on the sidelines of the annual Meeting of the Council of Heads of State of Shanghai Cooperation Organization being held in Samarkand, both sides affirmed the desire to strengthen cooperation in economic, trade, connectivity, energy, culture and people-to-people links.

The two leaders exchanged views on the entire range of bilateral relations. Both the leaders positively evaluated the outcome of the Pakistan-Iran Joint Economic Commission and agreed to further promote bilateral relations in diverse fields.

The prime minister underscored the need for closer bilateral engagement for boosting economic and energy cooperation, operationalizing barter trade, opening border sustenance markets, and facilitation of Pakistani Zaireen. It was agreed that Pakistan would be sending a delegation to discuss measures for expanded cooperation in bilateral trade and energy sectors.

Shehbaz Sharif extended his gratitude to President Raisi and to the people of Iran for their solidarity and support with the Pakistani nation during the massive floods in the country. He highlighted the devastating impact of the floods caused by climate change, and underscored that Pakistan, with the least carbon emissions, was bearing the cost of something for which it was not responsible. He stressed the importance of tangible international action to help address the challenges that climatically vulnerable countries like Pakistan were facing.

Shehbaz Sharif also had a bilateral meeting with President of Belarus Alexander Lukashenko here on the sidelines of the SCO moot. The two leaders comprehensively reviewed the bilateral relationship and discussed regional and international issues. The prime minister highlighted the massive human and material losses caused by the unprecedented floods in Pakistan and thanked President Lukashenko for his sympathies and condolences over the devastation caused.