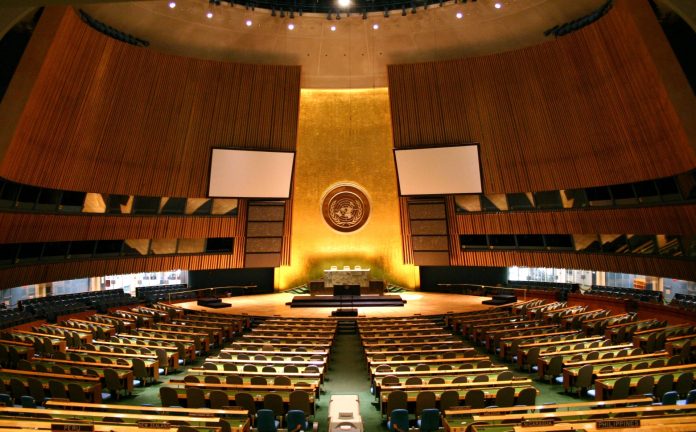 The UN General Assembly opened its session Tuesday, with its newly elected President urging the Member States to work together to develop solutions rooted in sustainability and science for a world rife with conflict and crisis.

Acknowledging that the world faces uncertainty and widening geopolitical fissures, Csaba Korosi of Hungary, who will lead the 193-member Assembly til; its next annual session, reminded delegates that the UN was created out of the ashes of war and destruction, with the intention of being “a well of solutions”.

“Responding to humanity’s most pressing challenges demands that we work together and that we reinvigorate inclusive, networked, and effective multilateralism and focus on that what unites us”, he said.

Korosi underscored that the conflict in Ukraine has been a “turning point”, and unless the world is vigilant, the “method” of warfare stemming from Russia’s invasion could become a part of the “toolkit of international life”.

“This war must be stopped. It kills people, it kills development, it kills nature and kills dreams of millions”, he emphasized.

The new president added that the risk of the use of nuclear weapons is now higher than in the past 40 years.

“This ominous reality calls all of us to unite around the issue of disarmament”, he noted.
Korosi also warned that conflicts will worsen as our planet heats up and its natural resources grow more scarce.

“The water crisis is poised to become our next greatest threat. Recent weeks have seen record-setting temperatures, raging fires and devastating floods. It looks as if Mother Nature is fighting back”, he said, further underscoring that the world cannot go back to ‘business as usual’ after COVID-19.

The Hungarian diplomat also pointed out that while ‘more manageable’, the pandemic continues to wreak havoc across the globe, along with acute food insecurity, soaring energy prices, record inflation and global supply chain disruptions.

“We will not be returning to the old normal. The only way to achieve better outcomes is to transform. The contours of the transformation we need are already known. The Agenda 2030 for Sustainable Development, the Sendai Framework, the Paris Agreement and Our Common Agenda, all point us in the right direction. What remains to be seen, is whether we will deliver”, he said.

The new president highlighted that during his one-year tenure, he would push “solutions through solidarity, sustainability and science”, enhancing the role of science in the UN body’s decision shaping.

“I will work to foster measurable progress in the sustainability transformation – and cultivate the solidarity we need to achieve breakthroughs or to avert future disasters. Taking stock of the Sustainable Development Goals is simply not enough. We need to have more science by our side if we want to realize the Goals by 2030”, he said.

Korosi is also committed to engaging meaningfully with civil society partners, academics, the private sector as well as researchers and practitioners to lend solutions that are rooted in facts, verified information and science.

“We must also reach out actively to young people, engaging them in what we do so that when they sit in these seats, they can come with better plans and better ideas than we did”, he added, noting the recent landmark resolution to create a United Nations Youth Office.

The UN Secretary-General, Antonio Guterres, was the second to speak during today’s General Assembly session.

He congratulated Korosi and underscored that unfortunately, the challenges that defined the 76th session, are still present.

“We face a world in peril across our work to advance peace, human rights and sustainable development”, he said, calling for solidarity to demonstrate the great promise and the potential of the United Nations.

Guterres told delegates at the General Assembly that the world is looking at them to use all the tools at their disposal to negotiate, form consensus and offer solutions.
“Debate. Deliberation. Diplomacy. These eternal tools represent the best pathway to a better, more peaceful world”, he underscored.

The UN chief closed his speech by highlighting that the 77th General Assembly Session must be a moment of transformation, “for people and planet alike”.

After the speeches, the Assembly then appointed Angola, Austria, China, Guyana, Maldives, Russian Federation, United States, Uruguay and Zambia to its Credentials Committee, which is mandated to examine the credentials of representatives of Member States and to report to the General Assembly.

The Assembly’s high-level debate in which many world leaders, including Pakistani Prime Minister Shehbaz Sharif, will participate, will begin on Sept 20.