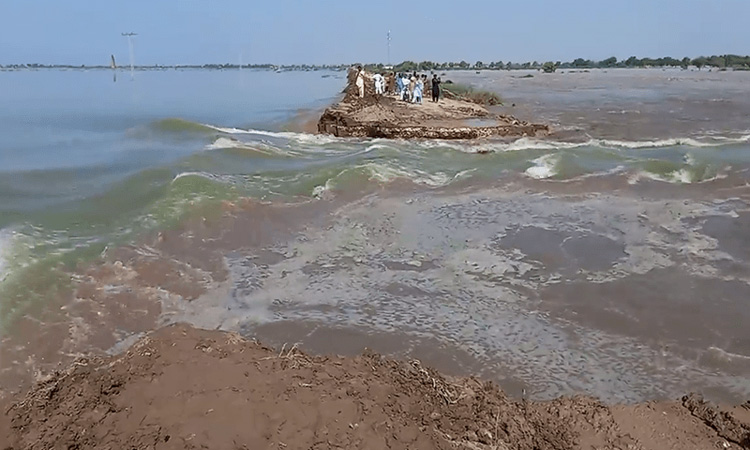 Pakistan Meteorological Department (PMD) forecasted another spell of rains in Sindh in continuation of the existing monsoon season, not long after Pakistan took a break from the torrential rains causing severe flooding across the country.

As per the Met department, a low-pressure system located in Indian state of Gujrat has integrated into another low-pressure system present in Central India. The rain-producing system is likely to cause more precipitation in areas of upper Sindh – many of which are already under water and bearing the brunt of catastrophic floods – till September 15.

Meanwhile, in Sehwan, efforts were under way to save Bhan Syedabad city, said MNA Sikandar Ali Rahoupoto, who had been elected from the area’s NA-233 constituency. “The situation where Ring bund is located was bad at night due to strong winds and tides, but it is back to normal now,” he said, adding that machinery was being used to complete work on Bhan Syedabad’s Ring bund. 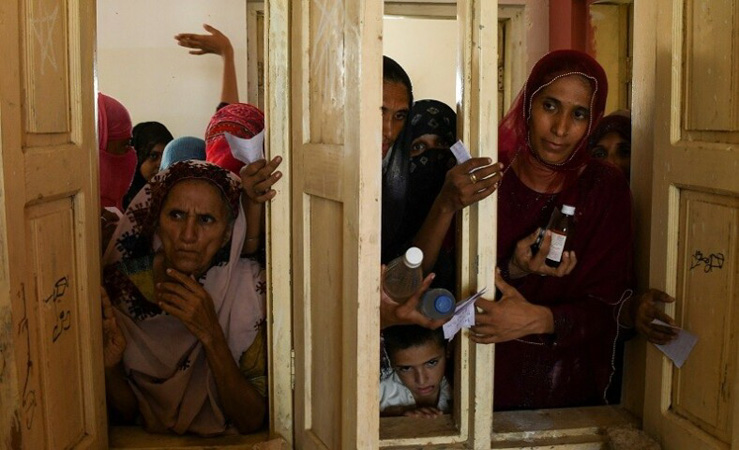 According to Sehwan Assistant Commissioner Iqbal Hussain, 450 villages in seven union councils of the tehsil were flooded by water from Manchhar Lake.

He said relief efforts in the area were ongoing and those affected by floods were being shifted to safe spots. “We have put up over 50 relief camps and tent cities,” he added. Sindh is where floodwaters from record monsoon rains and glacial melt in the mountainous north and hill torrents from Balochistan have converged and are wreaking havoc after leaving a trail of deaths and destruction elsewhere. Manchhar Lake – the country’s largest freshwater lake – has been the main source of the threat, compelling authorities to breach its protective dykes and other structures along its paths in an attempt to divert the flow of water towards less populated areas and prevent flooding in densely populated regions. Later in the day, Johi Assistant Commissioner Muhammad Ali Baloch said a fire had erupted in a boat belonging to a flood-affected family. “There were 15 people aboard. They were travelling from Johi to Dadu city,” he said, adding that the blaze started because of a petrol leak in the boat’s generator. He confirmed that no fatalities or injuries were reported in the incident. “The family managed to jump out of the boat in time and were then moved to safer locations in rescue boats,” Baloch added.

In a meeting to get an overview of rescue and relief operations in flood-affected areas, Sindh Chief Minister Murad Ali Shah was told that 371,440 patients has been brought to health camps set up across the province. “Of these, 18,804 reported gastro-related diseases, 20,968 skin related, 8,731 had malaria (suspected), 80 dengue (suspected), and 43,903 complained of other issues,” a press release issued by the CM House said. So far, 169 patients have died at the camps, it revealed.

Subsequently, the chief minister instructed the health department to ensure the camps were sprayed for mosquitoes and take care of all the people, particularly women, children and elderly, living in the camps. During the meeting, Shah was also told that the water level at Guddu and Sukkur barrages had returned to normal, while water at the Kotri Barrage – which is in high floods – was slowly reducing.

It was pointed out that four cuts were made at the Larkana-Sehwan Bund because of which water level near Mehar and Khairpur Nathan Shah had been reduced by one foot and three feet respectively.

Furthermore, the CM was told that there was enormous pressure upon the banks of the spinal from RD-816 to RD-159. The catchment area of LBOD received heavy rainfall yesterday, increasing pressure on its embankments.

Farmers in several villages of Sindh have braved the rising waters to stay on and try to keep alive their remaining cattle. Those stranded by unprecedented floods were running low on feed for their cattle, officials said on Tuesday, as airdropping supplies proved a difficult task.

“It is a serious issue,” an army official told Reuters. “Airdrops would not work, but it is important that fodder be supplied to livestock.”

The situation is set to worsen as weather officials have warned of more rain in the next few days, posing a fresh threat to thousands of displaced people living in tents or in the open alongside highways.

Officials estimate about 700,000 cattle have been lost in the floods nationwide, and the rest, which form a critical asset in a poor country, are growing thin for lack of food.