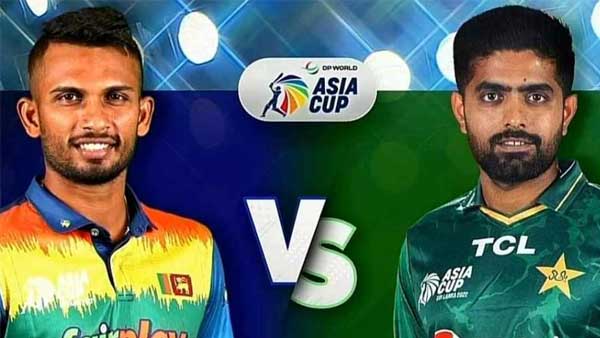 On Sunday (today), at the Dubai International Stadium, Pakistan and Sri Lanka will face off in what is predicted to be an exciting Asia Cup 2022 champions league final.

The day before the Asia Cup 2022 final, neither team played any cricket activity. Pakistan will have two changes in the team for the final. Shadab Khan and Naseem Shah, who were rested for the Super Four match versus Sri Lanka, will be included in the team. In the Super Four match, Hassan Ali and Usman Qadir played in their place.

According to sources, Fakhar Zaman and the middle order have been consistently failing to score runs, which has upset the Pakistan team management.

The Islanders will give it their all to win the Asia Cup trophy for the sixth time as they compete in their 11th final. Pakistan has reached to the cricket competition’s final five times and is well-positioned to win the trophy for the third time.

“We just wanted to try a few things as our attention is focused on the final. You would see a different Pakistan team than what you saw the other day in a relatively insignificant match. Every player would perform at his optimal level in the final as all our energies are focused on winning the Cup,” he said.

Captain Babar Azam encouraged the team members, saying, “I am lucky to captain a team that is full of potential. Every player is a matchwinner. We see a new Man of the Match in every match.”

Babar also placed a lot of value on winning the toss because, in his opinion, the team batting second in Dubai always had an advantage.  “I feel that the toss will have its role in the outcome of the match,” he said.