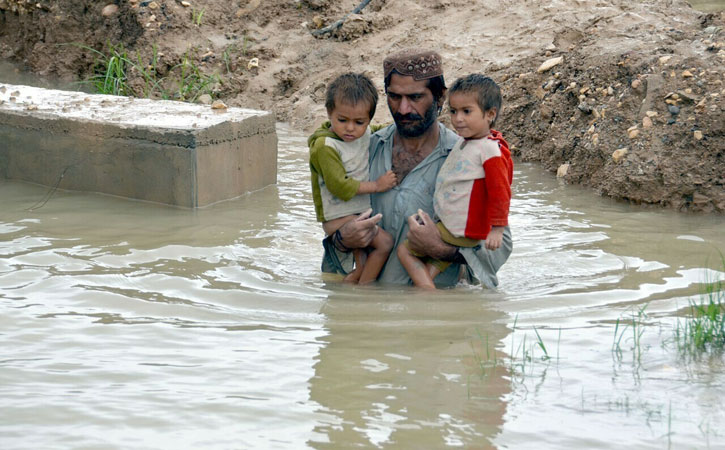 ISLAMABAD: More than three million children are in need of humanitarian assistance and at increased risk of waterborne diseases, drowning and malnutrition due to the most severe flooding in Pakistan’s recent history, UNICEF warned on Friday.

UNICEF is working with government and non-government partners to respond to the urgent needs of children and families in affected areas, said a news release issued here.

Some 33 million people – including approximately 16 million children – have been affected by this year’s heavy monsoon rains in Pakistan, which have brought devastating rains, floods and landslides. Over 1,100 people including over 350 children have lost their lives, and a further 1,600 have been injured.

Over 287,000 houses have been fully, and 662,000 partially, destroyed. Some major rivers have breached their banks and dams overflowed, destroying homes, farms and critical infrastructure including roads, bridges, schools, hospitals and public health facilities.

“When disasters hit, children are always among the most vulnerable,” said Abdullah Fadil, UNICEF Representative in Pakistan. “These floods have already taken a devastating toll on children and families, and the situation could become even worse. UNICEF is working closely with the Government and other partners to ensure that children affected get the critical support they need as soon as possible.”

In affected areas, 30 per cent of water systems are estimated to have been damaged, further increasing the risk of disease outbreaks with people resorting to open defecation and drinking unsafe water.

There are reports of significant damage to education infrastructure as 17,566 schools have been damaged, further jeopardizing the education of children. After two years of school closures due to the pandemic in the last few years, children once again risk further disruption to their learning, in areas where one-third of girls and boys were already out-of-school before the crisis.

The rainfall – nearly three times the national 30-year average, and more than five times the 30-year average in some provinces, has led to the government declaring a national emergency, with 72 districts declared ‘calamity-hit’ – mostly in Balochistan and Sindh, the two worst-affected provinces, as well as in Khyber Pakhtunkhwa and Punjab.

Cases of diarrhea and water-borne diseases, respiratory infection, and skin diseases have already been reported. They affect populations that are very vulnerable – 40 percent of children already suffered from stunting, caused by chronic undernutrition before the floods hit. The perilous humanitarian situation is expected to continue to worsen in the days and weeks ahead as heavy rains continue in regions already underwater.

As part of the UN flash appeal to support the response, led by the Government of Pakistan launched this week – UNICEF is appealing for US$37 million, and aims to reach children and families in the coming months with support including lifesaving medical equipment, essential medicines, vaccines and safe delivery kits, safe drinking water, sanitation supplies, nutrition supplies and temporary learning centres and learning kits.

According to UNICEF’s Children’s Climate Risk Index (CCRI), Pakistan is a known ‘climate hotspot’, where children are considered at ‘extremely high risk’ to the impacts of climate change, ranking 14th out of 163 CCRI-ranked countries and regions, placing Pakistan in the ‘Extremely high risk’ classification category in the Index. Children in ‘Extremely high risk’ countries face a deadly combination of exposure to multiple climate and environmental shocks combined with high levels of underlying child vulnerability, due to inadequate essential services, such as water and sanitation, healthcare and education.