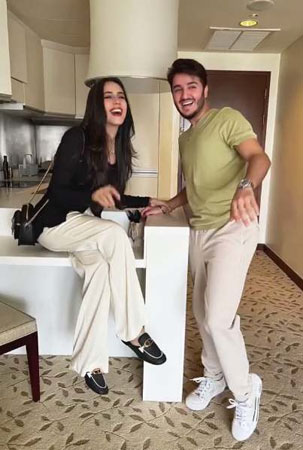 Well, with the reach of social media people especially couples have indulged themselves in showcasing their love publically. Celebrity couples leave no stone unturned to boost their chemistry in front of people consequently this act throws them in the court of social media critics. Shahveer Jafry and Ayesha Beig are considered to be the most loved and winning couple but it seems like their fans are getting sick with their content and are clearly bashing them for showing off romantic gestures openly.

Recently Shahveer Jafry dropped some extremely fascinating images, featuring him and Ayesha Beig in the most joyful and happy mood. The couple was spotted kissing and hugging each other in the mentioned above pictures. These pictures really took the internet by storm and a storm of criticism came on their way.

People are suggesting them to clearly keep their private moments in their rooms as it looks quite odd to show this much affection. It’s a bitter fact that social media shows things quite contrary to the real world. It is said the happiest couples on social media turn out to be the most stressful couples in reality. There’s not everything same that you watch on screens.

Things can be quite different from what you see.