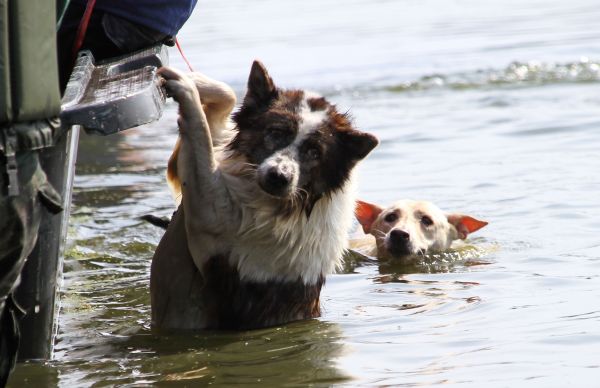 PESHAWAR: The devastating flood that badly affected life and property from hilly terrains to the downward plains, has also ruined a shelter house for stray dogs in Sardaryab area of Charsadda district.

“Lucky Animal Protection Shelter that was home to more than 250 stray and abandoned dogs has been badly hit by floods in Charsadda and we have to evacuate the animals in emergency,” reads an SOS call made by Zeba Masood, founder of the sanctuary.

She, in a tweet on the evening of August 27 (Friday), requested supporters and volunteers of the shelter for immediate help to protection the animals from flood water. Soon after hearing the news of flood water entering Charsadda, Zeba rushed to the shelter home and uploaded a video of rising tides of Kabul river, besides making an emergency call for evacuating the dogs.

Later, at night when the water started entering the shelter home, she uploaded another clip showing the terrified dogs being loaded into a vehicle for shifting them to a safer place. “Our shelter has been ruined and we have lost some dogs too,” reads another message posted by Zeba on her twitter account, the same night.

She also mentioned that communication link including motorway and other roads had been closed for traffic, adding that they were not able to reach the remaining dogs, which were left in the sanctuary inundated by four to five feet flood water.

“We managed to evacuate around 150 dogs on the night when flood water reached Charsadda, and around 100 are left there which took shelter at the kennel top and other places,” Zeba told. She said on receiving reports of flood warning, she rushed to the shelter home along with her husband for possible evacuation of dogs.

“We also made calls to volunteers for help but reaching the site was very difficult, since it was located near the embankment of Kabul river at Sardaryab.” Zeba said that she had shifted the dogs to different locations by requesting a few friends and dog lovers who provided temporary shelter to innocent souls.

“Now search for the remaining dogs is in progress and we have managed to find several canines from the rooftops of various houses abandoned by the inmates due to the flood,” she said.

A boat was also arranged to reach the near by areas where dogs could go for safety after inundating of sanctuary. The rescued dogs were passing through a fit of stress and fear, and needed a lot of care for which volunteers were requested to reach, she added.

She was arranging imported food for the evacuated dogs which was very costly, and therefore requested the supporters of the shelter to make donations so that food could be arranged for the dogs. She also expressed the hope that all the missing dogs would soon be found, and the evacuated animals would be shifted back to their shelter home once the flood water receded.