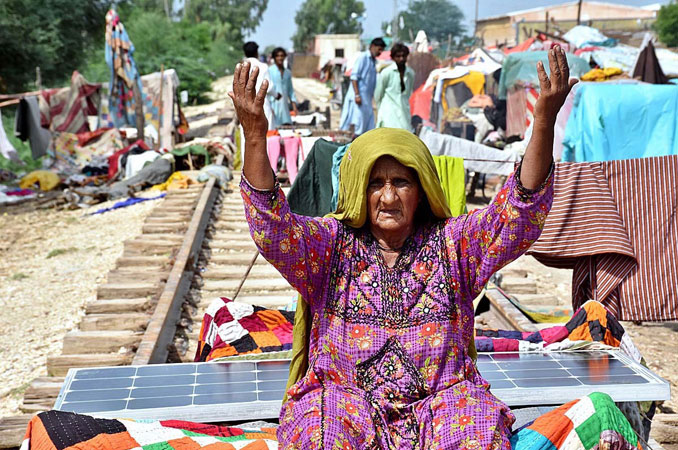 As many as 903 people have been killed, 1,293 injured and thousands left homeless as torrential rains lash the country, she said during a briefing on the current flood emergency to reassess the damage caused by the recurrent flash flooding in affected areas.

From Balochistan, the monsoon system has moved to Sindh where 30 districts are underwater. During the current monsoon, Sindh and Balochistan experienced 395% and 379% above the average rainfall, she said. She said both sides of the Indus were flooded in Sindh, which was the current epicentre of the calamity.

The shelter is dangerously impacted in the 30 districts of Sindh, and even in Balochistan, and now the same speed and velocity of water is being experienced in south Punjab.

People are adrift, livestock and crops are damaged. It is a humanitarian disaster of unprecedented monsoon proportions, said Sherry. Given the scale of the disaster, there is no question of the provinces or even Islamabad being able to cope with this magnitude of climate catastrophe on their own. Lives are at risk, and thousands are homeless. It is important that international partners mobilise assistance. The Indus is in high floods where flow of over 600,000 cusecs is expected to cross Guddu and then Sukkur Barrages on 23rd and 24th of August, 2022 which will bring all the Katcha area along Indus under water, displacing thousands of families.

This is in addition to the current displacement. In terms of precious human lives, 216 lives have been lost to the floods in Sindh. An estimated 1,500,000 katcha houses have been damaged and crops cultivated on 1,989,868 acres have been completely destroyed in Sindh. And with the new monsoon spell setting in, other areas in the country, especially DG Khan, will remain vulnerable to hill torrents.

Stressing the need for urgent and immediate relief measures, Sherry said, “The current climate catastrophe needs immediate international and national mobilisation of humanitarian efforts, not just in the form of food, shelter and basic survival amenities but we need to amplify our rescue efforts.” The NDMA, Pakistan Army, along with the provincial governments are tirelessly involved in dealing with this climate crisis. But lack of resources is a huge challenge. It is important to coordinate needs of calamity hit areas and triangulate with development partners and donors. Meanwhile, heavy rains continue to ravage the province of Sindh, killing another 15 people in house collapse incidents in the districts of Sukkur, Shikarpur, and other areas and leaving hundreds of families stranded and homeless. Rain lashed several cities in Sindh on Tuesday, including Sukkur, Shikarpur, Dadu, and Khairpur districts.

The stranded people need rescue and relief as they lack access to Umerkot city. The rain victims in Khairpur, Sukkur, Qamber, and Dadu districts protested against the lack of facilities, such as tents, food, and shelter, and held the Sindh government responsible for their miseries. The fresh rain spell has intensified problems leaving people in Balochistan with less or no food as flash flooding cuts off traffic between Karachi and Quetta. The Provincial Disaster Management Authority (PDMA) has said flooding may further aggravate in northeastern and central areas of the province. Several areas of the province, including Fort Munro, Dhana Sar, Sherani received lashing showers. It has been raining in Harnai, Shahrig and suburban hilly areas for several hours now. The high-level flash flood has cut off Harnai from the rest of the country. The weather system is causing rains in Dukki, Sanjavi, Mekhtar, Loralai as well. According to the PDMA, there are reports of landslide incidents in Fort Munro and Rakhni. Following a forecast of more rains in the country, Prime Minister Shehbaz Sharif ordered the authorities concerned to expedite rescue and relief activities in the flood-hit areas.The premier directed NDMA, all the concerned provincial ministries and departments to implement the orders jointly.