Gill back to capital on stretcher 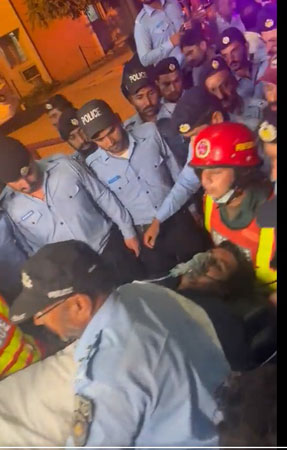 Following a heated standoff between Islamabad and Rawalpindi polices over the custody of Shahbaz Gill, the Adiala jail authorities handed over the custody of the PTI leader to the former late on Wednesday, a private TV channel reported. Gill’s custody has been given to Islamabad Police according to the directions of the court. A video posted by Imran Khan on his Twitter handle showed Gill being shifted on a stretcher from the prison. Earlier, reports said that after Gill’s checkup by the doctors of the Adiala jail, the authorities concerned were directed to shift the PTI leader to DHQ Hospital Rawalpindi. Following the directions, Islamabad Police and Rawalpindi Police had reached the Adiala jail to shift Gill; however, he refused to go with the former. This led to hours-long drama between the two law enforcement agencies. The Rawalpindi Police was adamant about shifting Gill to DHQ Hospital while Islamabad Police insisted on transferring the PTI leader to the federal capital as per court orders.

Following the argument, additional personnel of Islamabad Police were called to the jail. According to sources in jail, it was learnt that Gill had complained of difficulty in breathing and ill health due to alleged torture after which he was shifted to the jail hospital for a checkup. Meanwhile, after reports of the worsening situation, the Ministry of Interior had also summoned Rangers and FC to execute the court orders. Rejecting all allegations levelled against Islamabad Police, the spokesperson said that Gill was not subjected to any kind of violence during physical remand. The spokesperson further added that Gill underwent regular medical checkups, on the directions of the court and judges, which proves he wasn’t tortured.

Earlier in the day, a lower court in Islamabad remanded PTI leader Dr Shahbaz Gill in the capital police custody for 48 hours in the sedition case.Additional District and Sessions Judge Zeba Chaudhry heard the review petition of the prosecution following the directives of Islamabad High Court (IHC). Special Prosecutor Rizwan Abbasi pleaded that the judicial magistrate had granted only two-day physical remand of the accused after his arrest whereas the prosecution required his custody for further investigation.

He said the accused had been lying with the investigators, adding that there was a need to conduct a polygraph test.He said the duty magistrate had ignored various aspects in rejecting the request for further physical remand. The prosecution had received further details from the PEMRA regarding the interview of the accused. Abbasi said the accused had admitted before the police that his one mobile phone was with his driver.

The investigation officer, he said, had clearly written that the prosecution needed to probe various aspects besides recovering the devices. It had to be find out whether the accused had given this statement on advice of someone else or not, he said.He further pleaded that the police had not considered Gill’s statement as true then why the judicial magistrate accepted it as final. The prosecutor said in ordinary cases the police normally were given eight days physical remand of any accused but this case pertained to a criminal conspiracy.

He read out the judgment of IHC and said it was necessary for the investigation officer to be satisfied with the investigation findings.The police had found new developments in every day of remand.He said the police were requesting further physical remand of the accused so this should be granted. No one could refuse that the accused arrived on the TV channel himself and gave his controversial statement, he said.There was no solid reason before the judicial magistrate to dismiss the request of physical remand, he added.Concluding his argument, Rizwan Abbasi Advocate contended that the order of the judicial magistrate dated August 12 was unconstitutional and prayed the court to grant the police further physical remand of Shahbaz Gill.

Gill’s Lawyer Suleman Safdar said some aspects in the remand were kept secret, adding that it was necessary to know the reason that why the police required further remand.

He further contended that the case record was not provided so far.