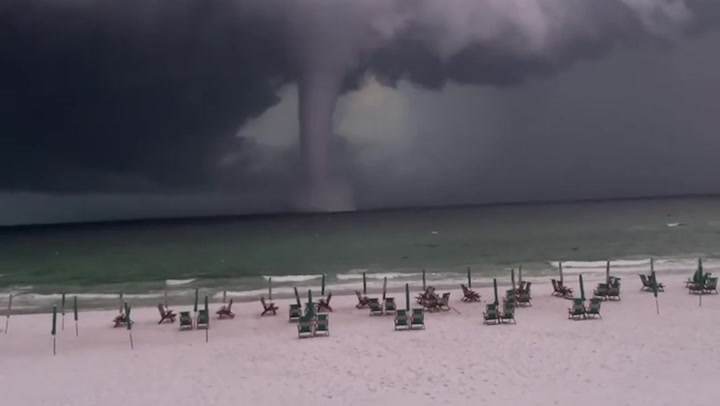 Footage recorded by Boo Freeman shows the spectacular scene near Destin in the northwest part of the state.

The United States’ National Weather Service confirmed the waterspout, and commented that it was a “rather impressive” one indeed.

Multiple funnel clouds were reported across the Emerald Coast on Tuesday morning.

The massive waterspout filmed at Coast of Florida was at 6 a.m. CDT Tuesday, Boo Freeman filmed a massive waterspout off the coast of Destin, Fla., about 50 miles east of Pensacola, before most people had their first cup of coffee. “What a morning! Wow!” Freeman posted on Instagram.

AccuWeather Senior Weather Editor Jesse Ferrell pointed out that this was not a typical waterspout. “It looks like this was a legitimate tornado over water formed by a supercell thunderstorm, not a weak waterspout spun up from a rain shower.”

This is the fifth waterspout reported by the National Weather Service off the Florida Panhandle this summer. Data on how often waterspouts occur isn’t well-updated, and most of them go unreported entirely, Ferrell said.

A total of five waterspouts have been reported by the national weather service office so far this summer.

Many of the waterspouts reported in northwest Florida this season have been off the coast near Tallahassee.