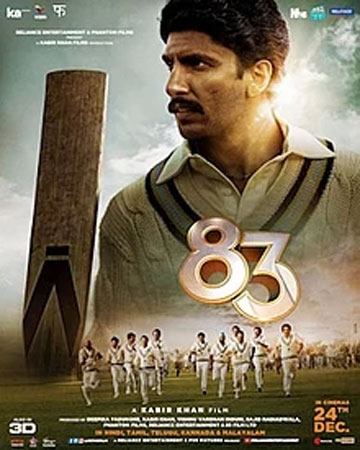 Bollywood actor Ranveer Singh, who played the role of former cricket captain Kapil Dev in ’83’ has won the Best Actor of the Year award at the Indian Film Festival of Melbourne (IIFM). Ranveer has so far been at the receiving end of accolades for his performance in 83 since its release, taking home the Best Actor trophy. The actor said that ’83’ will always be one of the most cherished films in his filmography.

Even during the Covid-19 pandemic, ’83’ opened at 12.64 crore nett and recorded a lifetime collection of 110 crore in India. Total global collection of the film stands at 200 crore nett. About the achievement, Ranveer said, “I would like to take this opportunity to thank all the jury members at IFFM for bestowing me with the Best Actor of the Year Award for my role as Kapil Dev ’83’ one of the most loved films of my career! It’ll always be one of the most cherished films in my filmography.” He further added, “But more than the accolades, it’s the process of making this film that I will cherish the most. I’m grateful to Kabir Sir for giving me this opportunity, for guiding me and for inspiring me with his leadership. I share this honour with the cast and crew of 83 who are so dear to me and with whom I share a very, very warm bond.”

Ranveer dedicated the award to every member of Kapil Dev’s World Cup winning squad. He said, “I dedicate this honour to Kapil’s Devils, a fine bunch of gentlemen who dared to dream, who through their efforts and achievements showed us that we Indians can be the best in the world.”

Ranveer Singh is known as one of the most versatile actors in Bollywood because of his shape-shifting ability to transform himself on screen every single time. From his debut in ‘Band Baaja Baarat’ to ‘Lootera’ and ‘Bajirao Mastani’ and ‘Gully Boy’, Ranveer has played some really memorable characters.

In the IIHB TIARA research that was recently released, Ranveer topped the list of the Coolest Superstar of the country – a very important brand attribute that makes him the most sought-after face in the brand endorsement space. He also topped Bollywood on being the Trendiest Superstar as per the same research. According to Duff & Phelps’ report, Ranveer’s brand valuation currently stands at 158 Million USD, an impressive growth from his number of 102.93 Million USD in 2020. The actor will be next seen in Rohit Shetty’s ‘Cirkus’ and Karan Johar’s ‘Rocky Aur Rani Ki Prem Kahani’.